Takeaway: This toy is cute and fun and provides a whole new kind of stimulation.

Every month, we get a new opportunity to showcase a new sex toy we love. But this isn't just at toy that we love, it's one our readers love as well. We've been hearing it in our social media feeds, in site searches, in email and in reader polls. So, what's the toy people are talking about: it's the LELO SONA. When we reviewed the SONA Cruise last year, people went a bit crazy - and it didn't really slow down from there.

So, what's all the fuss about? Here's why LELO SONA is our sex toy of the month.

SONA came out of the gates billing itself as the "world's first sonic clitoral stimulator." Are those really sonic waves coming out of that little nozzle? We have no idea, but this toy does feel different. SONA is designed to stimulate deep down into the internal clitoris, and most reviewers will tell you that it does, indeed, deliver some very deep, intense orgasms.

During build up, I can definitely feel pleasure running down both sides of the internal “legs” of the clitoris. It’s a sensation I’ve felt before, but it doesn’t happen very often, and I’m impressed. - Miss Ruby Reviews 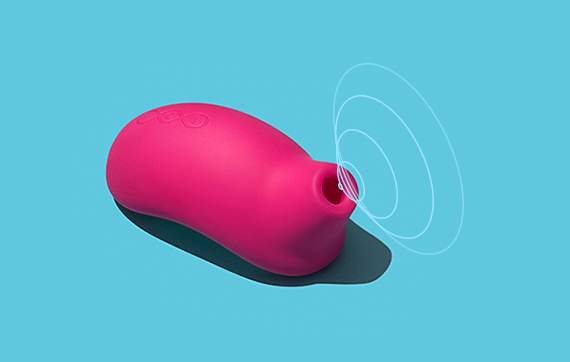 In use, I have to say the LELO Sona is genuinely incredible. The pulsations feel really intense on my clit and bring me to orgasm very quickly. Its a difficult sensation to describe, it’s as if my clit is pulsing, but in a really good way. - Miss Jezebella

It's All About the Clit

This isn't the only clitoral stimulator out there - Womanizer and Satisfyer, we're looking at you! - but we love what this new category represents. These toys are all about the pleasure palace that is the clitoris. They go right to it and deliver orgasms in the fastest, most efficient way possible. Not that slow orgasms are a bad thing at all, but we love that these new toys aren't ashamed to use the clit to its full and glorious potential. Not all reviewers of the SONA liked orgasming lickety-split, but most people were awed by SONA's orgasmic efficiency - and so are we! Plus, this toy's unusual shape is a great reminder of what can happen when designers think outside the (penis-shaped) box.

It Sits at a Great Price Point

LELO toys aren't cheap, guys. And while we'd definitely say that quality is worth shelling out for when it comes to sex toys, SONA sits just under $100. This is a solid price for a quality toy, especially for one that comes with all the luxury bells and whistles, including waterproofing, a body-safe silicone coating and a one-year warranty. (Oh, and so many orgasms!)

It Looks So Good

The LELO SONA Cruise has to be the smartest, classiest, sexiest looking ‘suction’ clit stimulator out there. - Scandarella

This toy is kind of weird looking - but it's also super cute and classy! It fits nicely in the hand, is made of the very smoothest silicone, comes in three colors (although two are pink ...) and looks pretty sweet laying just about anywhere. This is a well-designed and - now that it's gotten around - well-loved toy. If you haven't given it a try, maybe you should?