Do most sex toys leave you cold—particularly when it comes to your (ahem) nether regions?

Then I’ve got great news for you, for Lora DiCarlo’s Sway not only sports a state-of-the-art warming system but is a double-ended pleasure product.

Plus, it’s from Lora DiCarlo: a highly regarded sex toy designer and manufacturer. A company that, in addition to elevating the overall quality of vibrators through products like the Sway, also played a pivotal role in getting femtech products the respect they deserve. 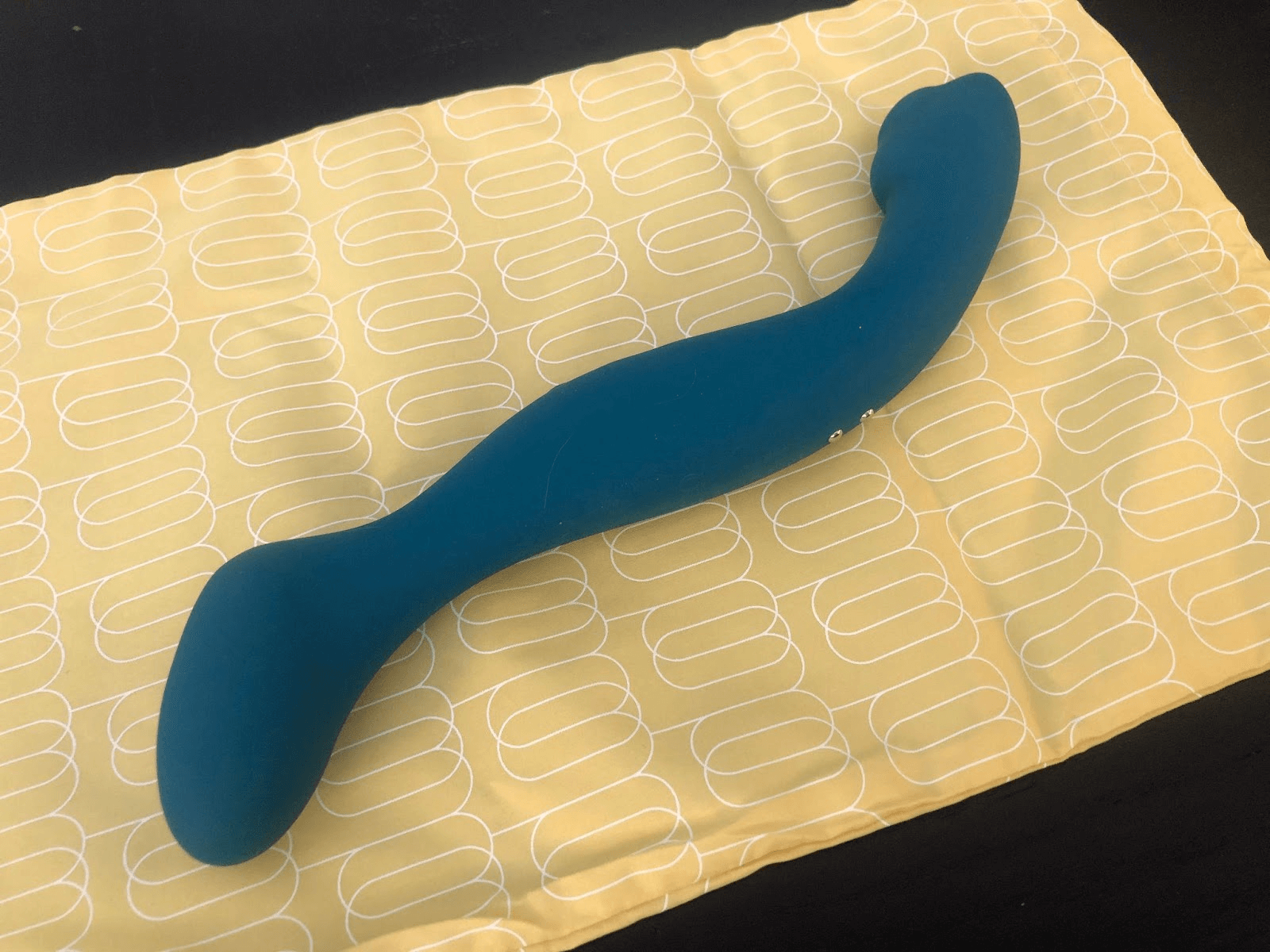 That alone is quite remarkable, but Lora DiCarlo has another impressive trick up its sex tech brilliance sleeve as the Sway is also equipped with what they refer to as WarmSense: a built-in heating system that automatically warms the toy to a toasty 104° Fahrenheit (or 40° Celsius).

This helps users avoid the unpleasant and definitely unsexy temperature shock that can sometimes happen when you pick up, switch on, and apply other vibrators to yourself without giving it time to get close to your natural body temperature. Time that, of course, could have been better spent getting to that all-important self-pleasuring action. 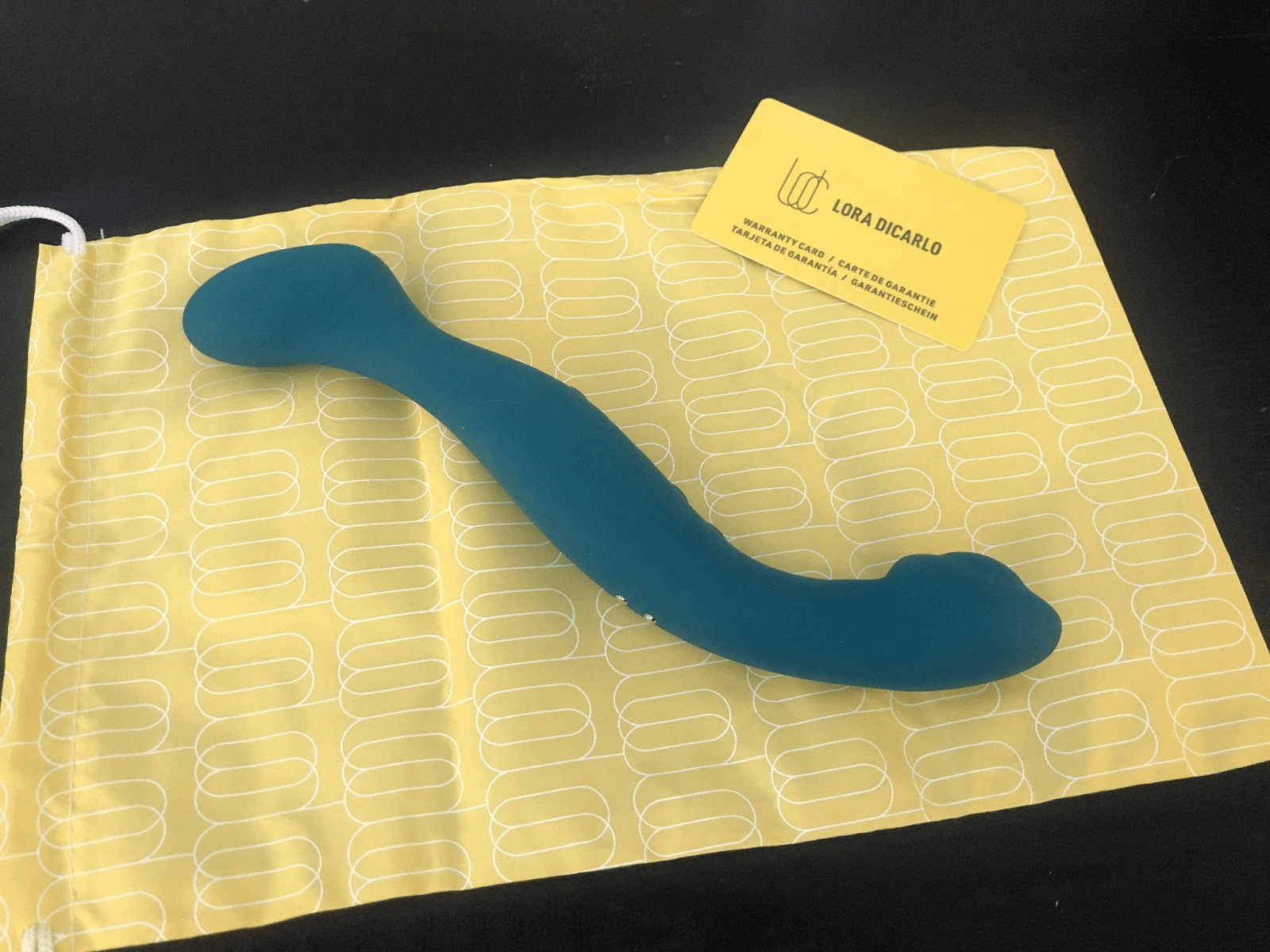 There’s an excellent reason why Lora DiCarlo’s Sway is a double-headed toy, as each end has been specifically designed to deliver two uniquely different sensations.

Lora DiCarlo’s Sway is also fantastic in other ways, as well, as its motors have the perfect power-to-intensity ratio to make it a fun nipple or clit-pleasing toy. And it’s a bit too much or too little; you can reduce the vibrations or flip the toy around until you find your sweet spot.

I had a lot (and I mean a lot) of fun with Lora DiCarlo’s Sway, with or without my partner, as it’s that rare kind of sextoy that just about anyone can have a blast fooling around with it. Again, I have to talk about its size as it’s been a common complaint with vibrators that, especially in the “throes of passion,” keeping ahold of them can be somewhat problematic.

Not with Lora DiCarlo’s Sway, as it’s ideally designed and absolutely comfortable to hold and, therefore, put it to good use.

In addition to allowing quick use without the need to heat it beforehand also gives it a remarkably realistic feel and makes it just the thing if you’ve been turned off by the cool mechanical feel of other sextoys. 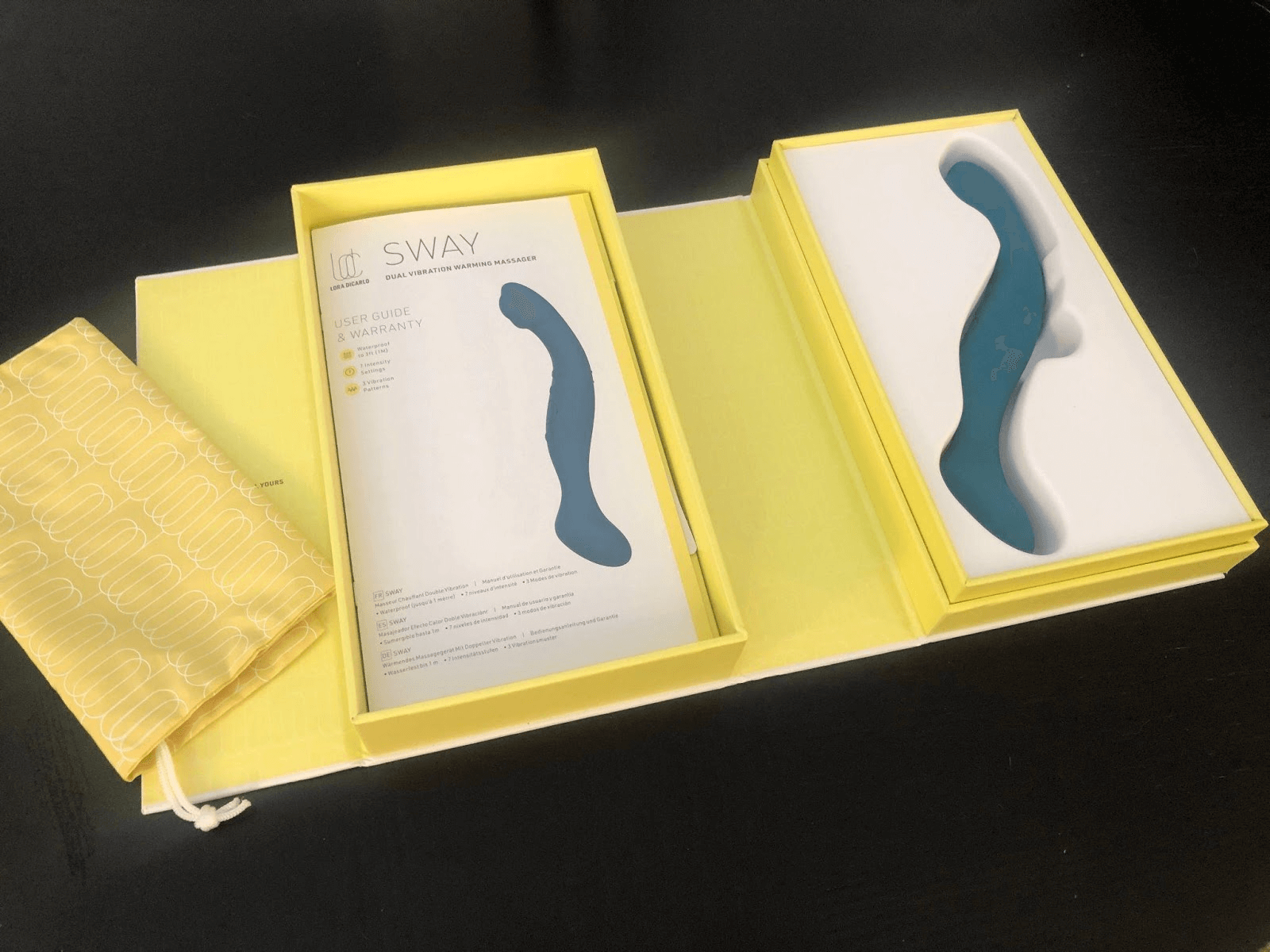 Lora DiCarlo’s Sway is one of the rarest of sex toys as it can be used anywhere for just about any kind of sexual pleasure. As I mentioned, it’s as fab for nipples as it is for the clit or all over and around the vulva.

Then there’s that Lora DiCarlo’s Sway is waterproof, so you can indulge in all sorts of splishy-splashy sexy times in your bath or shower and never have to worry about it conking out on you.

Lora DiCarlo’s Sway is just shy of nine inches long (228mm to be exact) and varies in width from a little less than four inches to three inches.

Like many other toys, Lora DiCarlo’s Sway is made of body-safe medical grade silicone on the outside and ABS plastic on the inside.

At its top speed, I’d hardly call it loud, as when I put it under the covers of my bed, I could barely make it out when I stood by it. This should undoubtedly come as a relief to those who worry their sexual activities will wake the neighbors or frighten the horses.

In the vibe department, Lora DiCarlo’s Sway has seven intensities that can be selected for either of its twin motors and, from there, four distinct vibration patterns.

Admittedly, it can feel somewhat odd when each motor is buzzing away and a few times experimenting with it, I felt like the hand I was using to hold onto it was going numb, but this also opens up the possibility that it could be used by two people at once, with Lora DiCarlo’s Sway held or wedged between them. 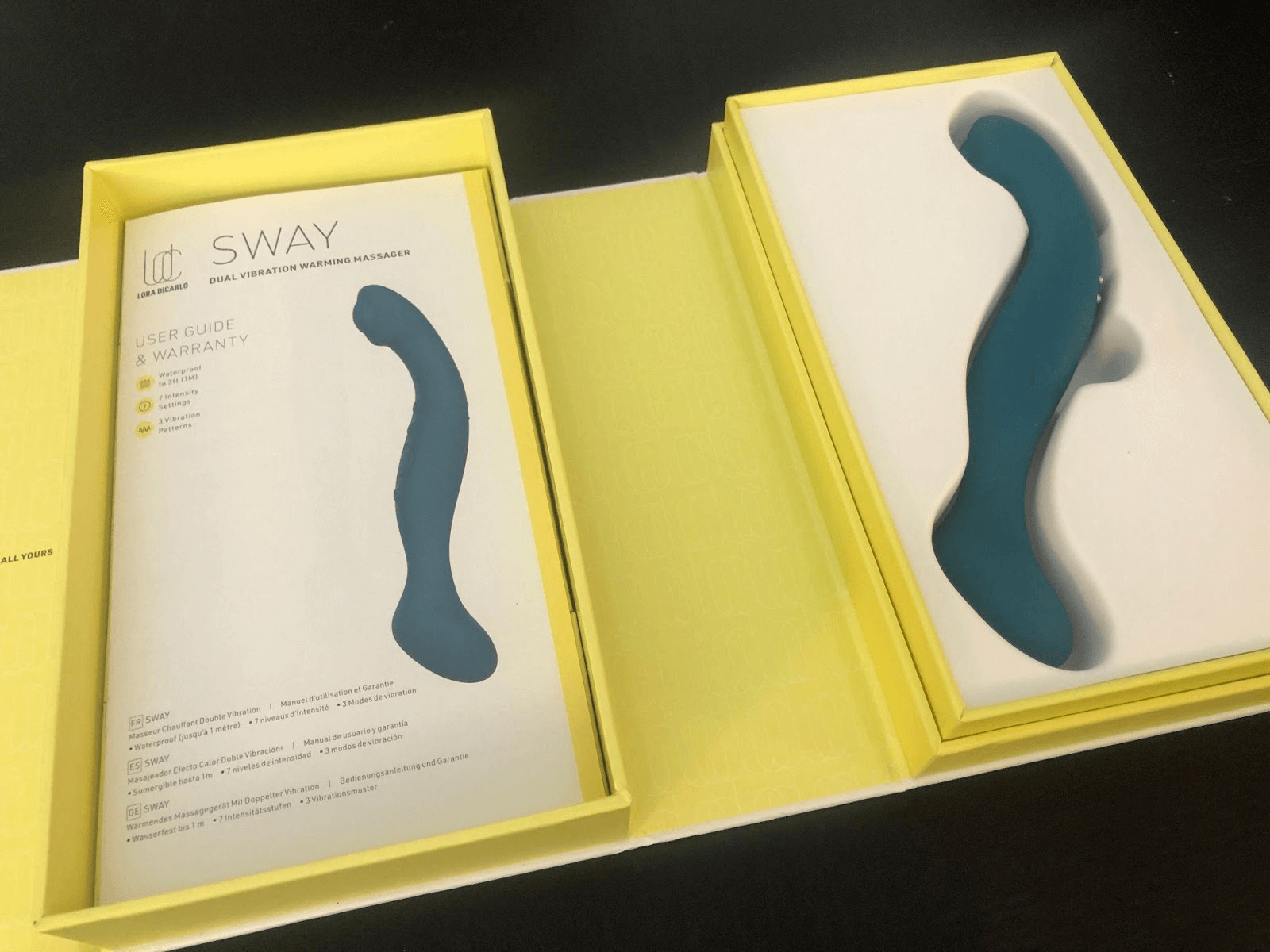 After initially changing it for a full two hours, you’re all set to begin using your Lora DiCarlo Sway.

In the center of it is what I guess you could call its primary control, which also doubles as its power-level indicator when it’s charging up, with each of the four segments of its circular LED light indicating if it needs more juice or is all set to go.

Holding this button down briefly gets things ready for use. Though if for some reason you change your mind, or it should somehow get powered up accidentally, the Sway will automatically turn itself off after five minutes of non-use.

If you’re traveling with it, there’s also the option to lock the toy to avoid TSA embarrassment. Just press the power and one of the vibration buttons, and it’s engaged—and then the same to release it.

Above the main button is another marked with a wave pattern. This is where you switch on the WarmSense heating feature. Unlike the vibrations, however, this will warm both ends of the toy.

Finally, at the very top and bottom are the single-button controls for power and for cycling through the toy’s intensities and those preset patterns.

Here's a closer look at each end: 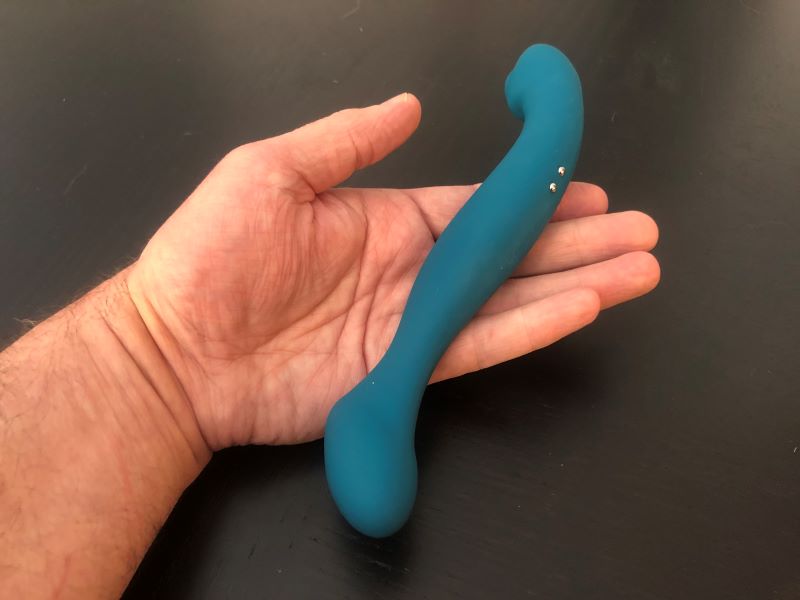 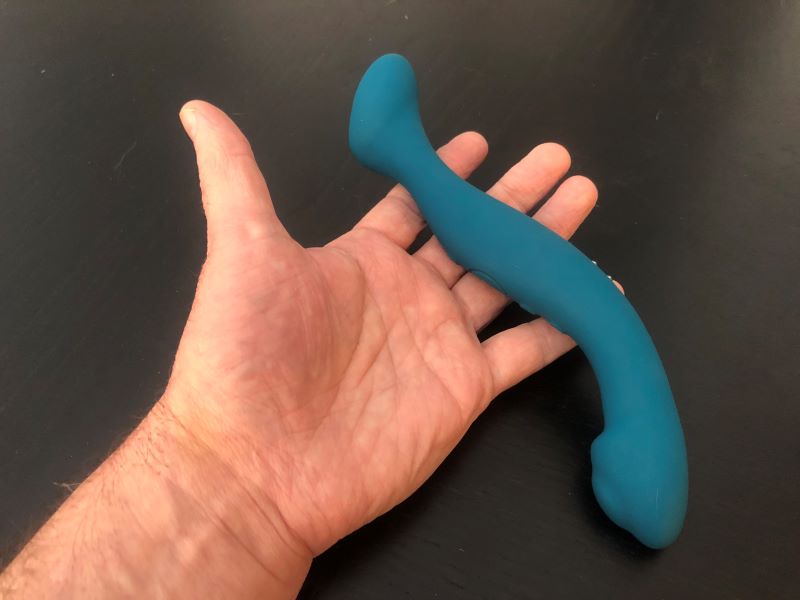 Charging the Lora DiCarlo Sway is done through the provided USB cable that magnetically attaches to the toy. A special call-out is due here, and further testament to Lora DiCarlo’s quality, as, unlike the many toys I’ve test-driven, their magnetic charging system does what it’s supposed to in staying connected. Still, it can get dislodged but far more than I’ve experienced with their competitors.

Now we get to playtime, and where I have to say that the Lora DiCarlo Sway doesn’t fare as well when compared against other vibrators, as on a complete two hours charge, you’ll only have around an hour or so to enjoy it.

Drat, I say! But all fairness, I have to admit that when you factor in that this is a twin-motor toy, and a heated one at that, it makes sense that the battery will drain more quickly than a one trick pony type of toy.

Cleaning the Lora DiCarlo Sway should come as no surprise to anyone already familiar with silicone-based sextoys. If you aren’t, it’s as easy as using some warm (but not boiling) water and a tiny amount of antibacterial soap—or the application of a specialized product cleaner.

Afterward, merely dry it with a lint-free cloth and then store it in the handsome bag that Lora DiCarlo provides with the toy.

Like all of their products, the Lora DiCarlo Sway comes with a one-year warranty that activates once you register—and only when the toy is bought directly from Lora DiCarlo and not any other retailer.

When it comes to presentation, few beat Lora DiCarlo for quality and style. The Lora DiCarlo Sway is no exception, as here is a box that could easily contain everything from high-end cosmetics to the most Apple-ish of computer hardware.

I’d almost say this is a company that overdoes it, and if the Lora DiCarlo Sway were way overpriced, I most assuredly would. But considering what this toy does and how well it’s made, I’d assuredly say that the box and what the Sway comes with is just icing on the cake.

Should you get a Lora DiCarlo Sway? In a word: yes. This is a unique, ultra-fine quality sex toy with many excellent features, such as the dual-end design and twin high-powered motors. I like the effective and enjoyable heating mechanism that makes it feel very close to lifelike and nothing at all like a cold mechanism.

There’s also that Lora DiCarlo is a remarkable company. Remember how I teased this at the beginning of this review? Well, here’s a bit more detail, and while it doesn't immediately address the Sway, I still feel like it’s very much worth noting.

You see, back in 2018, at the Consumer Electronics Show in Vegas, they were given the prestigious Robotics Innovation Award—only to have the organizers change their minds because they were suddenly uncomfortable regarding Lora DiCarlo being a sex toy company.

What they didn’t expect was a fight, which is what Lora DiCarlo did: calling CES out not only for their takey-backsies of the award but for their history of hypocrisy when it comes to women, sex and their event.

The end result was that Lora DiCarlo got their award, and through their single-handed efforts, got CES to change their rules to now allow sex tech to be treated with much-deserved respect. Then, in 2020, they received a pair of awards for that year’s show for their Onda and Baci vibrators.

If you do like the sound of a double-pleasure toy but perhaps one not as pricey, then we suggest looking at the Cloud 9 G-Spot Slim Double, as it does something akin to the Sway but for less than half its cost.

Finally, we recommend for G-spot stimulation the ZALO Queen: an affordable toy yet powerful and aesthetically pleasing toy—so it looks as good as it feels.