by JOELLEN NOTTE
Published: JANUARY 3, 2017 | Updated: JUNE 28, 2022 03:51:26
Things that were once considered kinky and perverse are starting to be accepted as what they are - fun options for exploring our sexuality. While everything else on this list is available in several different types, this product is really one of a kind. This is one of my favorite “so you want to try e-stim” products due to its small size, its multi-use options, and its fingertip presentation. There is no bulky toy, just your partner’s hand.

This feels like a strange question here because, well, they’re vibrators but, to once again call upon my favorite Star Trekkin’ reference “They’re vibrators, Jim, but not as we know them”. So, e-stim vibrators are just that: vibrators that will also provide electrostimulation. 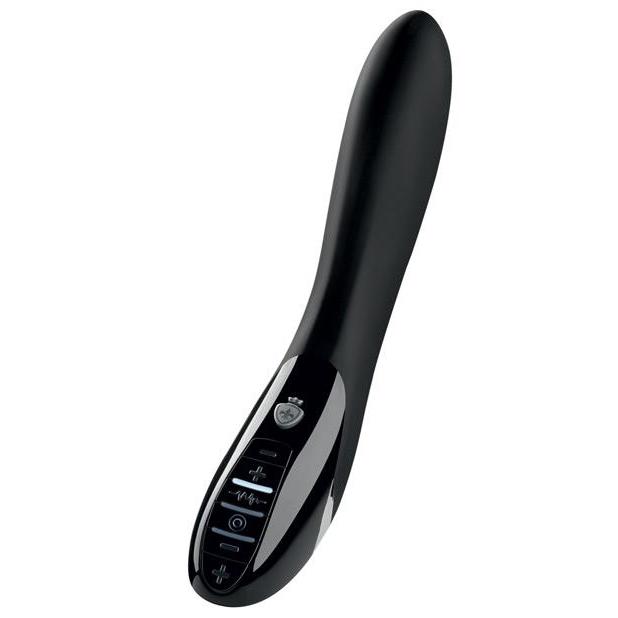 Wand toys use static electricity to create a shocking sensation. Originally intended for (questionable) medicinal use, the Violet Wand eventually became popular as a tool for e-stim play. As the practice grew in popularity and the market expanded, more affordable products (like the Neon Wand) were created. The two types of wands work in different ways (explaining why could get boring; the Internet will tell you more) and thus provide slightly different sensations, with the pricier product regarded as “stronger.” The Kinklab Neon Wand is one of the most popular wand toys.

The great thing about an e-stim wand is that it opens the door to a whole world of play options. Wands can be used with a number of attachments of varying shapes and sizes to create a variety of sensations by touching the attachment directly to your partner’s skin. But wait there’s more! You can also indirectly transfer the the sensation through…wait for it…you! In this case you serve as a conductor for the electrical output. This allows you to deliver shocks while gently (or not so gently) touching your partner with only your hands - fun! Additionally this opens the door to using all sorts of fun metallic objects in your e-stim play. Wartenberg wheels are a popular choice, but I’m partial to my sexy claw, and I have a friend who loves running a knitting needle over his partner’s body. Seriously, you’ll never look at your household goods the same way again!

TENS is short for Transcutaneous Electrical Nerve Stimulation. Originally (and still) used by medical professionals to relieve nerve and muscle pain, a TENS units features the main power box, where the electrical current lives and where the controls are and a pair of electrode pads designed to be placed within a few inches of each other on a muscular area of the body. When you move this all into a sexual/genital setting the results can be pretty rad. The Mystim Tension Lover is a popular e-stim unit aimed at beginners.

Are you still with me? I know, I just slipped in something that many people are most familiar with from a medical setting and doesn’t really fit the “least intimidating” bill but, hear me out. If you find that e-stim play is your jam, a TENS unit can be a lot of fun.

No matter what you choose to play with do remember, as with any sexual play, safety and consent are of the utmost importance. Employ a safeword to allow the partner on the receiving end to communicate that they would like to stop and follow the instructions that come with your e-stim products (seriously, e-stim vibrators and copper IUDs are apparently a no-go, read your manuals!). As with many things, it’s a good idea to obey the adage “start low, go slow” and take your time finding out if you and your partner enjoy e-stim. Think of it as an experiment. Have fun, be safe, and, if you’re anything like me, giggle a lot. Who knows, maybe sometime soon you too will be all abuzz!