I Want to Try Electrosex. Where Should I Start?

Welcome to The World of Electro-Sex.

Both of those scenarios are entirely doable—and well within the wheelhouse of electro-sex beginners! The gentle, fingernail-like sensations come from the Kinklab Neon Wand: a plug-and-play electro-sex toy. While a bit more complicated, the deep muscle contractions come from the electrodes of a Mystim powerbox.

As the wonder of technology gets even more advanced, we've figured out amazing ways to point it towards sexual fulfillment. Those ways don't necessarily require a PhD in electrical engineering; they're designed to be approachable to almost anyone! As always, I recommend knowing the safety concerns before you hop in—but you're going to be surprised how simple it is to give electro-sex a try!

Read: 9 Things to Check Before Playing With Electrosex.

Now that you've heard about these amazing options for arousal (that go way beyond your standard vibrators!), you might be wondering how you can try it for yourself. And hey, that's exactly what I'm here for!

How to Try Electro-Sex

There are two paths to start your exploration into electro-sex:

The type you select will really depend on your goals and your patience level. While both are accessible to beginners, that doesn't mean both of them will work flawlessly on the first attempt. Deep tissue e-stim involves a lot more trial-and-error than surface-level e-stim.

So, let me explain the differences—and outline the "tools of the trade" you need to get started with electro-sex:

I was going to talk through their pros and cons first; but I'm realizing it's so much easier to understand what we're talking about if you have a mental picture of what's going on. So let's talk through some of the electro-sex toys I'd recommend for a beginner starting their journey into e-stim. (Sounds like you, if you're reading this article!) 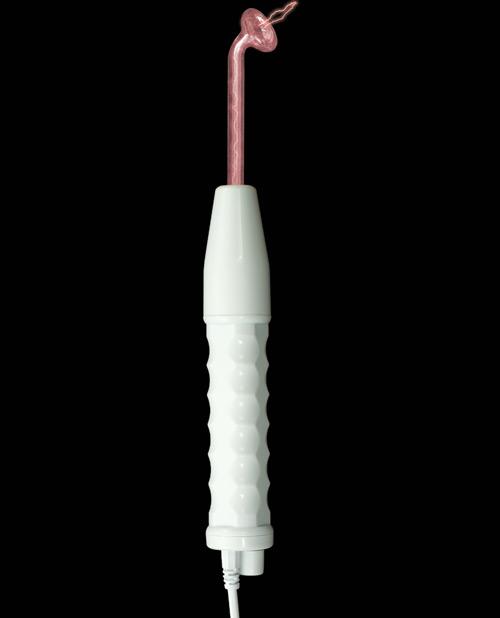 The Kinklab Neon Wand is a great tool for those starting their journey into electro-sex. Think of it as your very own magic wand: Anywhere its glass tip touches, you'll feel a gentle tickling sensation. That tickling sensation is due to the electricity conducted through the glass "electrode" (that's what we call the glass part that sticks out the top).

Neon Wands are NOT designed for insertion of any kind; but they are designed for surface-level play. They can be dragged along the skin for unique sensations almost anywhere on the body. However, you should avoid any areas with metal in or outside the body—such as electronics, piercings or internal metal plates. 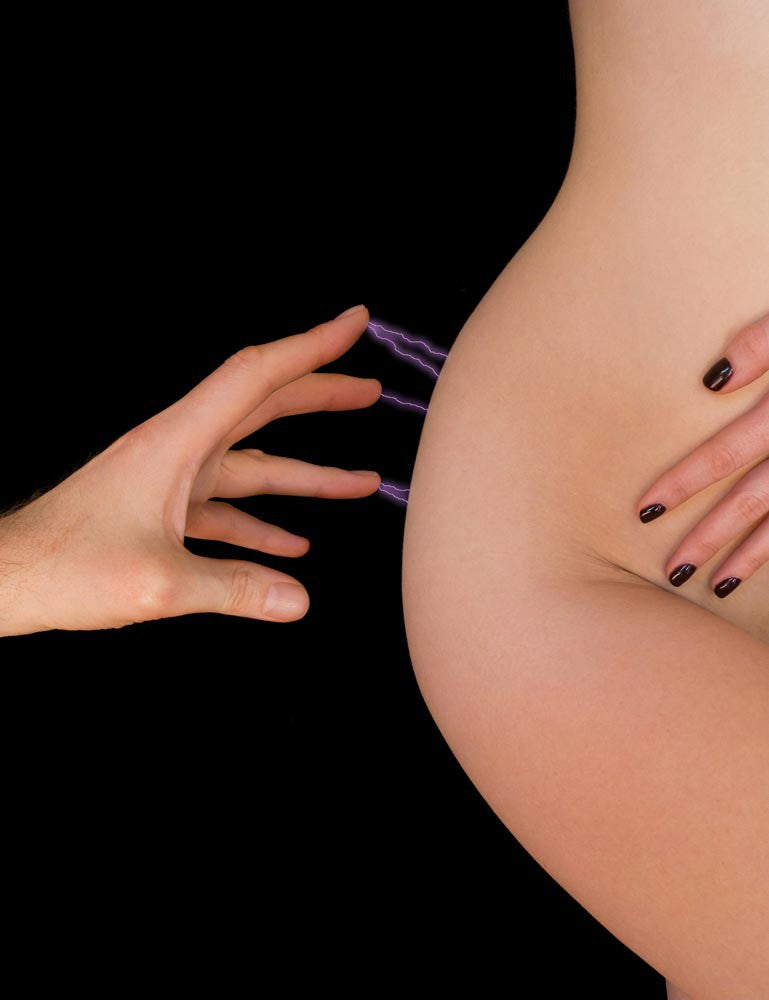 While we're only talking about the base kit of the Neon Wand today, there are really fun ways to expand the its potential once you fall in love with it. The Body Contact Probe, for example, can be worn against your body and turns the wearer's entire body into the Neon Wand's contact point—so every single touch causes a spark (even with the penis or vulva!). 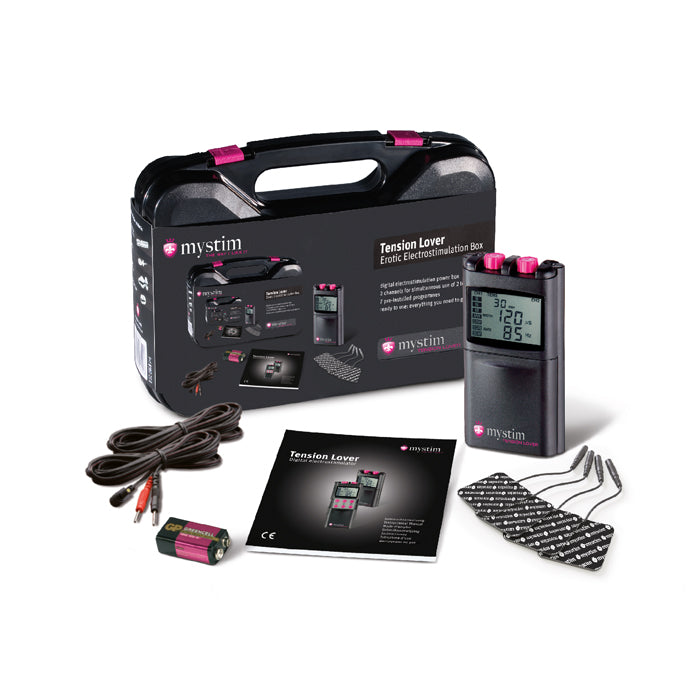 Based on the medical-use TENS Unit devices, the Mystim Tension Lover looks a little bit complicated with all of its wires and pads. I promise, though, it's not as complicated as it seems.

See, the Tension Lover allows electricity to run underneath the skin and into the underlying muscle. It does this through the included electrodes—which are a bit like extra-sticky, fancy stickers. Just place the electrodes anywhere beneath the belt (NO PLAY near the heart!); and the electricity can flow between the points where you've placed the electrodes.

So, if you place an electrode on either side of the vulva, you can see exactly how simple it would be to light up the entire vulva with delicious sensations. Unlike the Arcana or Neon Wand, using electrodes like this is mostly set-it-and-forget-it: You place the electrodes in one spot, turn on the e-stimulation, lay back and let the sensations happen. There's no need to hold them in place or move the electrodes around to keep experiencing new sensations. 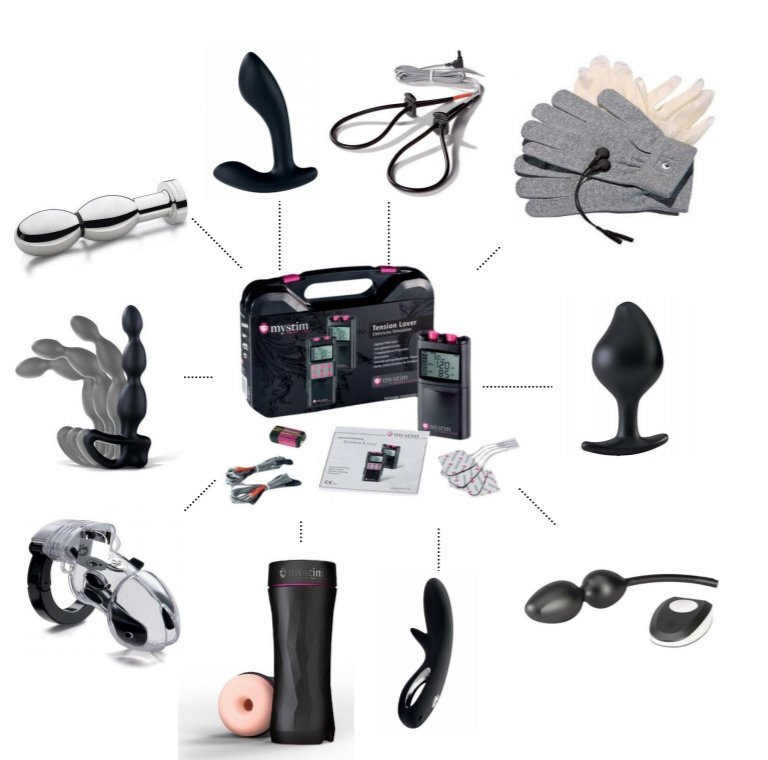 (As a note, there are three Mystim powerboxes to choose from when you're getting started. I generally recommend the Mystim Tension Lover over the other two. That's because it offers a clear, large display that makes it easy to figure out what you're doing—and because it comes with seven beginner-friendly, pre-made pattern settings. These settings allow you simply turn on the Mystim Tension Lover and let it do all of the electro-sex sensations for you, which can be really really helpful when you're first starting and all of the electro-sex jargon seems overwhelming.)

Toys for Surface-Level and Deep-Muscle Electrostimulation 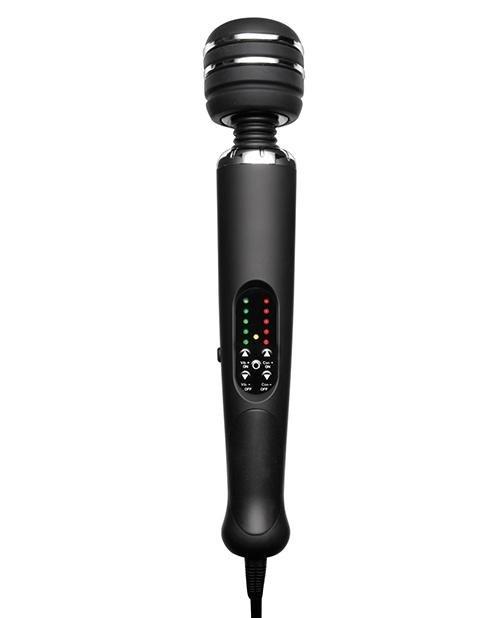 Think of the Zeus Arcana as a wand massager with some superhero capabilities. The Arcana is the happy middle ground between surface-level e-stim and deep tissue electro-sex.

While the Zeus Arcana is equipped with multiple levels of vibration—like a standard wand massager—it also happens to be equipped with multiple levels of electrostimulation. Just press it up against the body and activate the e-stim to feel the pulsations of electricity. With the Arcana's placement outside the body, and no other electrostimulation point to share the electricity with, you get a sensation that's noticeably surface-level—but can still be felt within the deep tissue, especially on the higher intensity levels.

(It's a bit counterintuitive—but the Arcana's e-stimulation will feel less intense with more contact against the body. More contact with the wand helps diffuse the sensations a bit!)

What is the Best Electro-Sex Toy?

"But, Mistress Kay," you might be saying. "Just tell me which one is the best to buy."

That's the thing, though: Just like with other sex toys, what's right for you is probably wrong for someone else. Everyone has their own unique priorities, preferences and comfort level—so a "one size fits all" approach to anything sex, whether it's an e-stim toy or a butt plug, is likely to disappoint more people than it is to be the perfect fit.

With that in mind, let's compare these options based on some of the most common questions you might have about electro-sex—so you can make an educated decision about which one is perfect for you.

Which Electro-Sex Sex Toy is Gentlest?

Let's say you're brand new to electro-sex and this shit terrifies you. But it also excites you in the best of ways. Odd how arousal works sometimes, isn't it?

If that's the case, I'd highly recommend the Kinklab Neon Wand. It's the most approachable option out there. Not only is it instantly removable if something makes you uncomfortable (literally just pick it up off the skin), but it also feels the most like a sensation many of us can relate to. While the Mystim powerboxes can feel like an invisible hand is forcing your muscles to contract, the Neon Wand's tracing sensations feel much easier for our brains to categorize based on our previous experiences.

The Neon Wand also happens to be one of the most approachable from a safety and concern standpoint. Since the Neon Wand's electro-sex sensations stay surface-level, it's easier to avoid the danger spots (tattoos, electronics, metals, the face) and play without concerns. This is especially true for people concerned about accidentally harming their partner—so it can be a large bonus.

To put it pretty plainly: Back when I used to do electro-sex and kink 101 demos, I'd always have a Neon Wand on hand to showcase to complete strangers. The people who were adventurous enough to give it a try on their forearm always squealed in happy surprise, then said "Do it again!".

Read: The Joy of Finding Your Fetish.

Which Electrostimulation Method is Faster to Learn?

On the other hand, deep-muscle e-stim takes a bit longer to set up—and it punishes you a bit more if you don't know what you're doing. It's a lot easier to accidentally turn up an unintended electrostimulation setting—and the resulting feeling is not quite the sensation you were going for.

Read: How to Bounce Back After a Bedroom Embarrassment.

It will likely take you multiple sessions—and lots of references to the instruction manual—to figure out what all of the adjustment options on the Tension Lover do. Unlike the Neon Wand, which has a single turn-dial that controls everything, the Tension Lover's powerbox comes with a multitude of different buttons. All of these buttons allow you to perfectly customize the electrostimulation waves well beyond what you can explore with the Neon Wand; but it's still something that takes time to learn.

Electrode placement, like with the Mystim Tension Lover, also requires a lot more trial-and-error. It's very possible to reposition electrodes during a single session; but it isn't as simple as just moving the tip of the Neon Wand. It'll require unsticking the electrode, possibly applying electrode gel and resticking the electrode.

But, as we'll touch on later, finding that picture-perfect electrode placement can lead to hands-free orgasm—so it's worth the effort for a lot of people!

Which Electrostimulation Method is Faster to Use During Sex?

Surface-level electrostimulation, like with the Neon Wand, also wins this one by a landslide. Once you receive the Neon Wand and read the directions, all you need to do is plug in a glass electrode, plug the Wand into the wall and skim the Neon Wand's tip along your partner's skin. Boom. Electro-sex. Done!

This one can be up and running in less than a minute—and takes even less time to put it away afterwards.

It, honestly, really is that simple.

Which Electrostimulation Method is More Orgasmic?

It kinda seems like the Mystim powerboxes lost all of the other categories, doesn't it?

But they take the win where it matters for a lot of people: orgasm.

While surface-level e-stim—like the Neon Wand—feels fantastic, it's very rarely orgasmic for people. On the other hand, with properly placed electrodes, the Mystim powerboxes can be used for sexual stimulation—and orgasm. If your body takes well to the sensations, and you get the electrodes placed perfectly, it can even offer hands-free orgasms.

As Sunny Megatron says, "No other toy can produce the deep, penetrating sensations that a TENS unit can. As a woman who often has a hard time climaxing, it’s just what I need. I usually use both channels on myself. One electrode pad on either side of my clitoris mimics the sensation of someone sucking it. I set the controls so the waves of electricity pulse like the rhythm of a fast heartbeat. Coupled with an insertable contracting my vaginal muscles, the TENS produces some of the most intense orgasms I’ve ever experienced."

This gives the Mystim powerboxes (like the Pure Vibes, Tension Tamer, and Cluster Buster) the clear win in this category!

Electro-sex can open up brand new worlds of pleasure by introducing (gentle!) electric shocks alongside your regular sexy sensations. For beginners, starting with something gentler—like surface-level e-stim—can help work you up to more intense stimulation.

And lastly, I don't want to say that more knowledge is always better; but it generally is better than less knowledge!

With that in mind, check out Kinkly's Electro-sex Knowledge Center to fully flesh out your understanding of e-stim—and learn more about the giant range of things that are possible.