It started with a great orgasm, one that knocked her right off the side of the bed.

“I was lying there on the cold tile floor, one leg hitched up on the bed in this stupor, like, oh my lord, what just happened … and how can I do that again?” DiCarlo said. 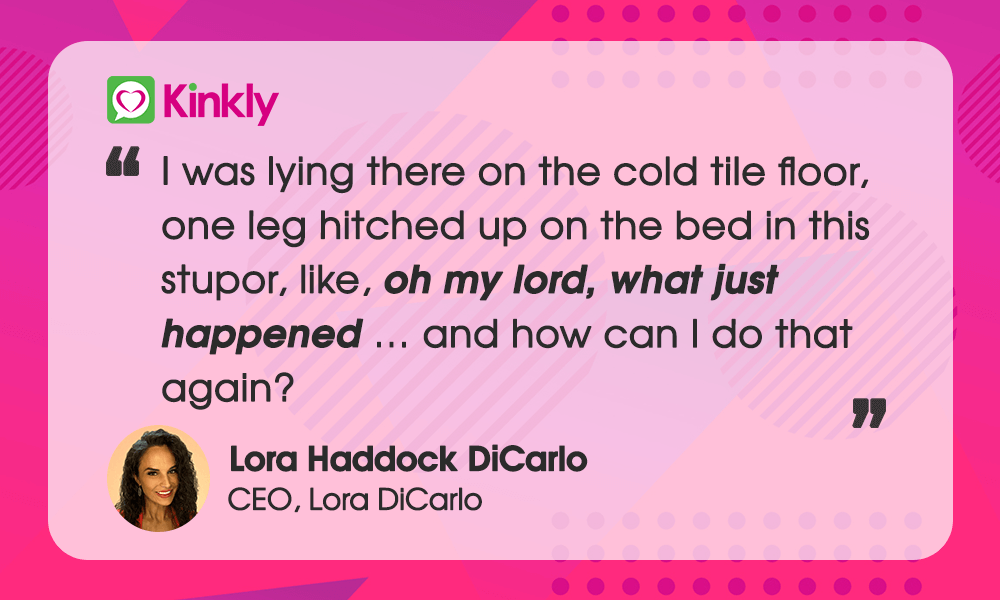 That orgasm occurred with the help of a partner. The partner didn’t last, but that orgasm stuck with DiCarlo.

“I wanted to be able to do this by myself, for me, because that was really powerful.”

DiCarlo is the CEO and founder of the eponymous sex toy brand Lora DiCarlo, which engineers high-tech devices designed to empower personal pleasure. 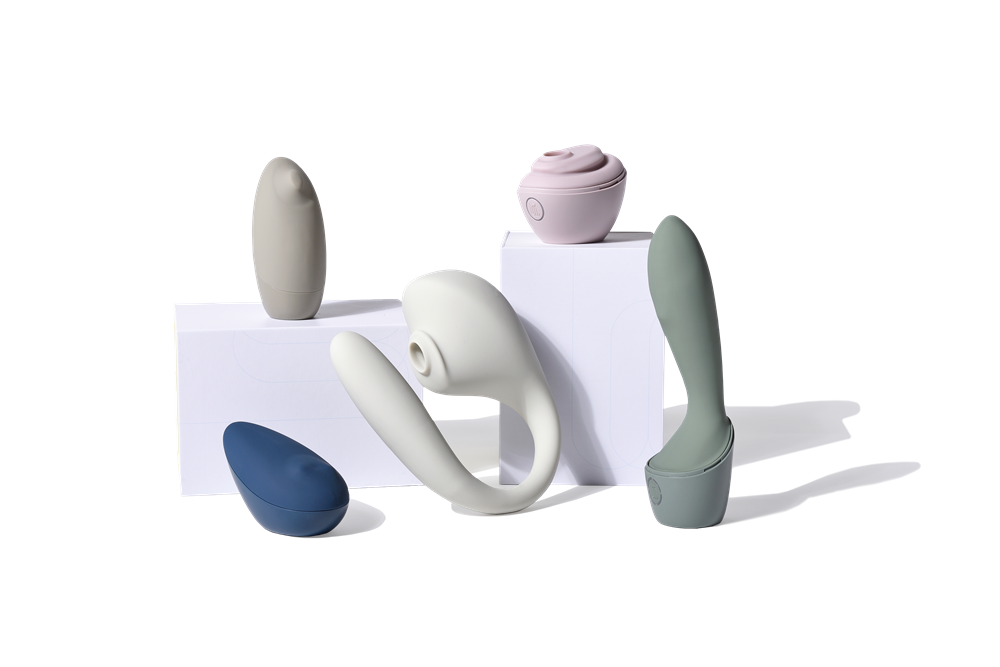 A collection of vibrators from Lora DiCarlo, Osé is featured in the center.
Source: Lora DiCarlo

With a background in healthcare (and part of a medical doctorate) under her belt, DiCarlo started researching anatomy, curious about the mechanics behind her big O. She learned that what she’d experienced is called a “blended orgasm,” and started looking at what products were on the market to create one. She also started talking to friends and acquaintances, and even launched an online survey to collect data from people about the position of their clitoris and G-spot.

“Every person I talked to had the same reaction,” DiCarlo said. “At first they were aghast and embarrassed - and then they were, like, ‘this is so interesting and I’m really curious.’ That’s when I also realized that so many people know so little about their physiology and their own pleasure.”

Read: I Learned How to Have Blended Orgasms with My Fiancé and It Rocked My Whole World

Realizing there was both a market for the kind of product she had in mind and a real problem it could solve pushed DiCarlo to found her company and get to work on a prototype. Her next stop was the Robotics & Engineering Lab at Oregon State University, where she met with Dr. John Parmigiani, Research Associate Professor in Mechanical Engineering.

“I sit down with this man and the first thing that pops out of my mouth is, ‘so, I had this great orgasm …” DiCarlo said. “And he just turned bright white and then bright red and then I’m, like, ‘but I have this list of 52 functional engineering requirements in order to create the product.”

Seeing the potential from an engineering perspective, a team of student engineers and professors was assembled. Several months later, they emerged with five patents and a prototype for the Osé, a robotic massager designed to create a hands-free, blended orgasm.

This product would launch the company into the media spotlight - but not in the way they might have expected. After applying for the CES Honoree Innovation Award at the Consumer Electronics Show (CES) in 2019, they were surprised to win it.

“We thought we’d have some accolades behind the product before we launched it,” DiCarlo said. She never assumed she’d win.

But not for long. Once the Consumer Technology Association (the organization behind the show) realized they had given an award to a sex toy, they back-pedalled, revoking the award and banning the company from the show.

DiCarlo and her team decided to dig in their heels against what they saw as an injustice.

“We fought it,” DiCarlo said. “There was a lot of gender bias. In the show, there hadn’t even been a female keynote speaker in 2017 and 2018. So, we decided to launch an international awareness campaign around the gender biases at CES and the world of tech at large. It was a hard decision to make. I was really scared.”

The campaign gained press in the New York Times, NPR, across tech media and almost everywhere in between. Support for the company poured in - along with criticism of the CES’ antiquated views. By the time 2020 rolled around, the CES had restored the award and offered two more for the company’s latest offering, the Baci and Onda. CES also agreed to allow sextech to exhibit at CES in the health and wellness category.

By the time Lora DiCarlo started taking presale orders in November of 2019, customers were already pouring in, along with funding from investors.

It’s a success story many companies in the industry can only dream of - at least so far. When asked how she’s managed to smash through so many of the barriers that tend to stand in the way of sex toy manufacturers, DiCarlo says it boils down to company values.

“Respect, empowerment, integrity. If we can’t live by our values, what’s the point? When everything happened at CES, we had to question ourselves about what the right decision was,” DiCarlo said. “What that’s done for us is taken a lot of the questions out of whether we’re making the right decisions - are we being too disruptive, are we making too much noise? As long as we’re making decisions based on our values, I don’t care how loud we have to be.” 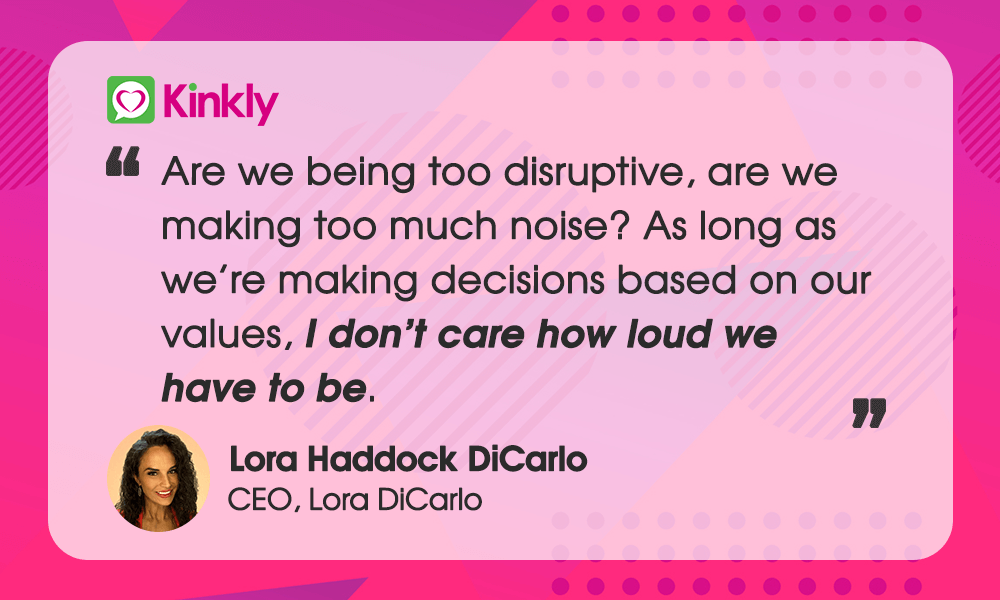 2021 is shaping up to be a big year for Lora DiCarlo. The company has launched several new products and aims to move into more wellness products (“lotions and potions,” DiCarlo calls them) to complement their collection of devices. They’ve also recently teamed up with model and actress Cara Delevigne, who will serve as a co-owner and creative advisor. They are also working on a top-secret campaign they hope will circumvent some of the gatekeeping around marketing and advertising around products in this space.

As for the sexual health market itself, DiCarlo has high hopes but recognizes there is still a lot of work to be done.

“When I started as a founder I thought it would be easy. This is what I want to do, all I have to do is execute. But with all entrepreneurs, it’s never easy and it’s never fast,” DiCarlo said. “The same thing goes for changing the perspective around sexuality and women’s health. It seems easy - it’s the way it should be. It’s not easy in practice. It’s arduous, difficult, painstaking … but it is becoming a movement. It takes time and persistence, but we’re here for it.” 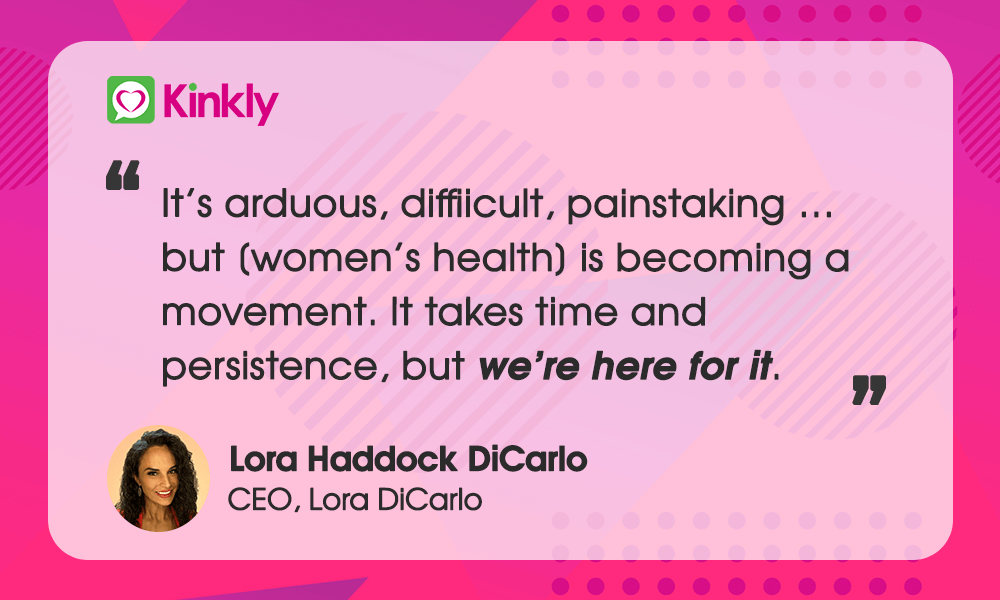