“Like I say in my bio, I was trying to manifest some good dick in LA for a while. Also, penises are involved in making every human in some way, so technically we’re all 50 percent dick!” 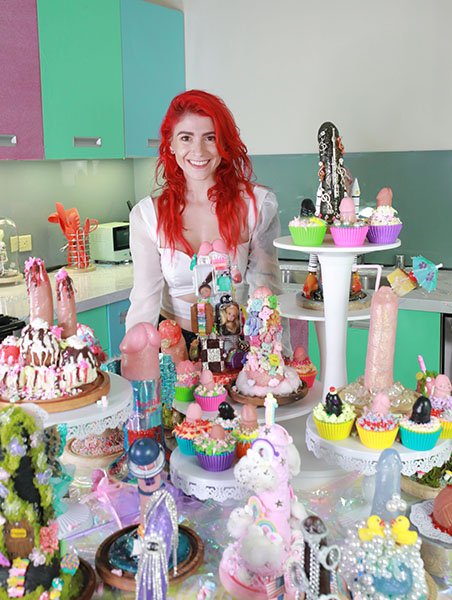 How It All Began for Jen Stein

In all, Stein currently has 32 artfully rendered cocks currently available for sale, though she prefers to sell via Instagram DM’s. The process for making her items can take weeks to months, depending on factors including tracking down the precise adornment or art. Still, with parts and labor being what they are to her work, she still aims to keep her products priced between $85 to $250. Though they’re definitely not suitable for sexual use, for the “sex connoisseur who has everything” on your holiday list, this is a surefire way to make a memorable impression.

“Obviously, when using a sex toy, they are supposed to be non-permeable to keep them sanitary. Great for health, bad for art. I typically have to attach needles, nails, and pins to everything that I’m putting on the dick, because it won’t stick with just glue. I’m also making the pieces that I’m putting on them out of clay, affixing things onto my creations with hot glue, and in general, I love glittery cocks.”

When asked about what drives her inspiration and goals for what she’s creating, a deeper sense of her motivations become apparent.

“I live downtown in LA’s fashion district, so I’m always inspired,” Stein continues. “At first I wanted to create a visual representation of every guy I ever slept with. But that as inspiration got boring, because well, not all of them deserved art for their penis. Now, I’m more inspired by things people will say, good dick puns, and pop culture.”

Even more, contemplating the sociopolitical impact of her art, Stein noted, “It’s important that I’m a female profiting from dick without exploiting or trafficking anyone. Think about how many men, brands, etc profit off of the appeal of the female body. As a female working in today’s society, everyone has an idea of what a female should be, how they should act. I hate that. You are either a qualified human or not, and how you feel about sex, how you talk about it, as long as you are always acting with consent, should have nothing to do with it. I could go on forever about the problems I see with how sexuality is shamed for females in society- we should save that for our next conversation."

"As far as [Adult Arts and Crafts], the US government is making so many restrictive laws on women’s bodies these days. If [they] expect women to be reproductive machines, then we should at least allow them to have fun in the process... I just want as many people as possible having access to having ‘dickor’."

Yes, a play on “decor.” This is her self-appointed name for her art.

Read: Sex and Cannabis: An Interview With Ashley Manta

What's Next for Jen Stein?

Ultimately, as far as next steps for the brand, Stein is both realistic and hilarious regarding goals and sustainability.

Then, not missing a beat, she deadpans, “It’s a good way to relax, you know? I hammer a couple of nails into a dick before I go to bed at night.”