The Coital Alignment Technique (CAT) is a variation of the missionary position that's designed to stimulate the clitoris, making it much easier for the receiving partner to climax during intercourse. Research has shown that only 18% of women are able to climax from penetration alone; for 36.6%, clitoral stimulation is a requirement for orgasm. Positions like the coital alignment technique are a way for partners to enjoy penetrative sex while increasing the odds of orgasm for the receiving partner. 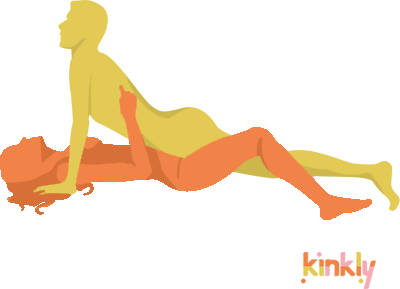 As a variation of missionary position, getting into the coital alignment position is simple; the penetrating partner simply needs to slide forward along their partner's body until the penis (or strap-on) is pointing up, rather than down. This better aligns both partners' pubic bones and allows for stimulation of the clitoris during the penetrating partner's up and down stroke. The receiving partner can also wrap their legs around their partner to open up the clitoris to additional friction and stimulation.

This technique has a rather unsexy name because it was first defined by American psychotherapist Edward Eichel in the late 1980s. Eichel hypothesized that the sex position would "correlate with high frequency of female orgasm and partner simultaneity." As it turned out, the position was found to significantly increase sexual satisfaction for women during penetrative, heterosexual sex.

In 2021, the position made an appearance in the Netflix series "Sex/Life," which generated renewed interest in it and its orgasmic potential.

It is important to note that while orgasming during penetrative sex is possible for many people with vaginas, its importance - and the primacy of simultaneous orgasm - is often overstressed, particularly for heterosexual couples. In reality, people orgasm in all kinds of different ways and often take varying amounts of time to do so based on their anatomy as well as changing factors such as health, fatigue, arousal and many other things. While having more satisfying sex is a very worth goal, the key is to avoid being too focused on any particular way of getting there. So, give the coital alignment technique a try. Just remember that there are many different ways to have sex and orgasm, and they're all equally valid as long as everyone has a good time.

The End Around Position

The End Around Position
Try This Position