by M. CHRISTIAN
Published: JANUARY 10, 2022 | Updated: JANUARY 21, 2022 07:47:38
Presented by KINKLY SHOP
Give ball sex a go with Balldo - a uniquely pleasurable toy for the penis-equipped that gives all new meaning to the phrase "balls deep."

The Verdict: Four Kinkly Hearts (out of five)

You know, I really have to stop opening my sex toy reviews with how unusual this or that toy is. Not that many of them aren't, it's just it kind of diminishes the impact of the very, very few that truly are different.

And the Balldo is most assuredly that, as I couldn't find anything anywhere that even comes close to its innovative design and exceptionally distinctive purpose. 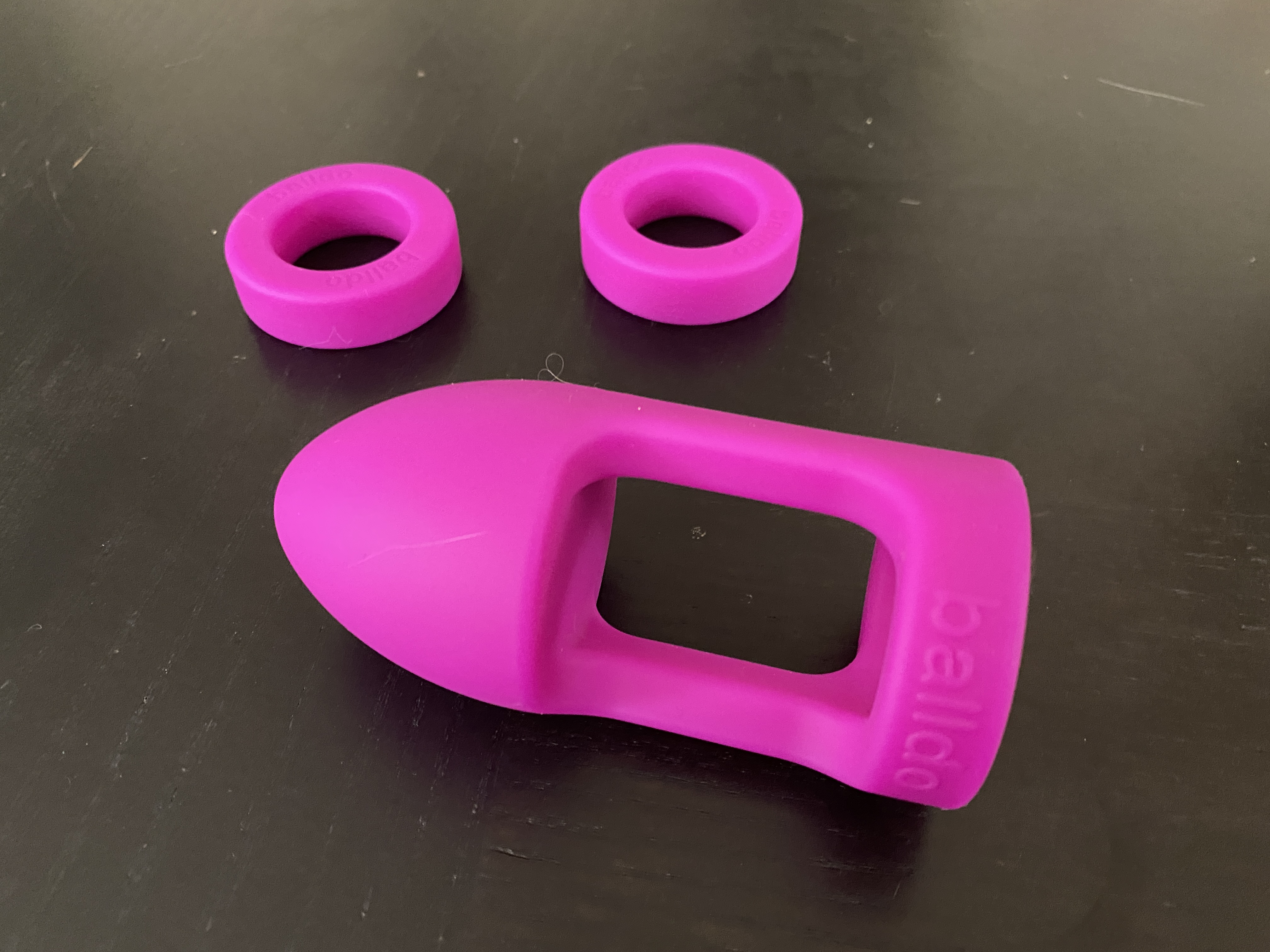 If I had to describe the Balldo, it'd more than likely be how it somewhat closely resembles a vaguely-penis-shaped silicone bullet, and a rather large caliber at that, with a sort of cage at its base.

Looking at it, you'd be forgiven for not immediately understanding what it is, how to use it or what you're supposed to do with it.

In short: Balldo is worn around a penis-equipped person's scrotum to allow the wearer to engage in penetrative sex without requiring them to get and stay erect.

Balldo's form and function clearly differentiate it from the sex toy herd. Its differences continue, as well, as it's packaged with a pair of spacing rings to help support and lengthen its dildo-ing.

So the next question becomes, what does it take to wear a Balldo, and from there, does it actually work as a penetrative sex toy?

How Do You Use Balldo? 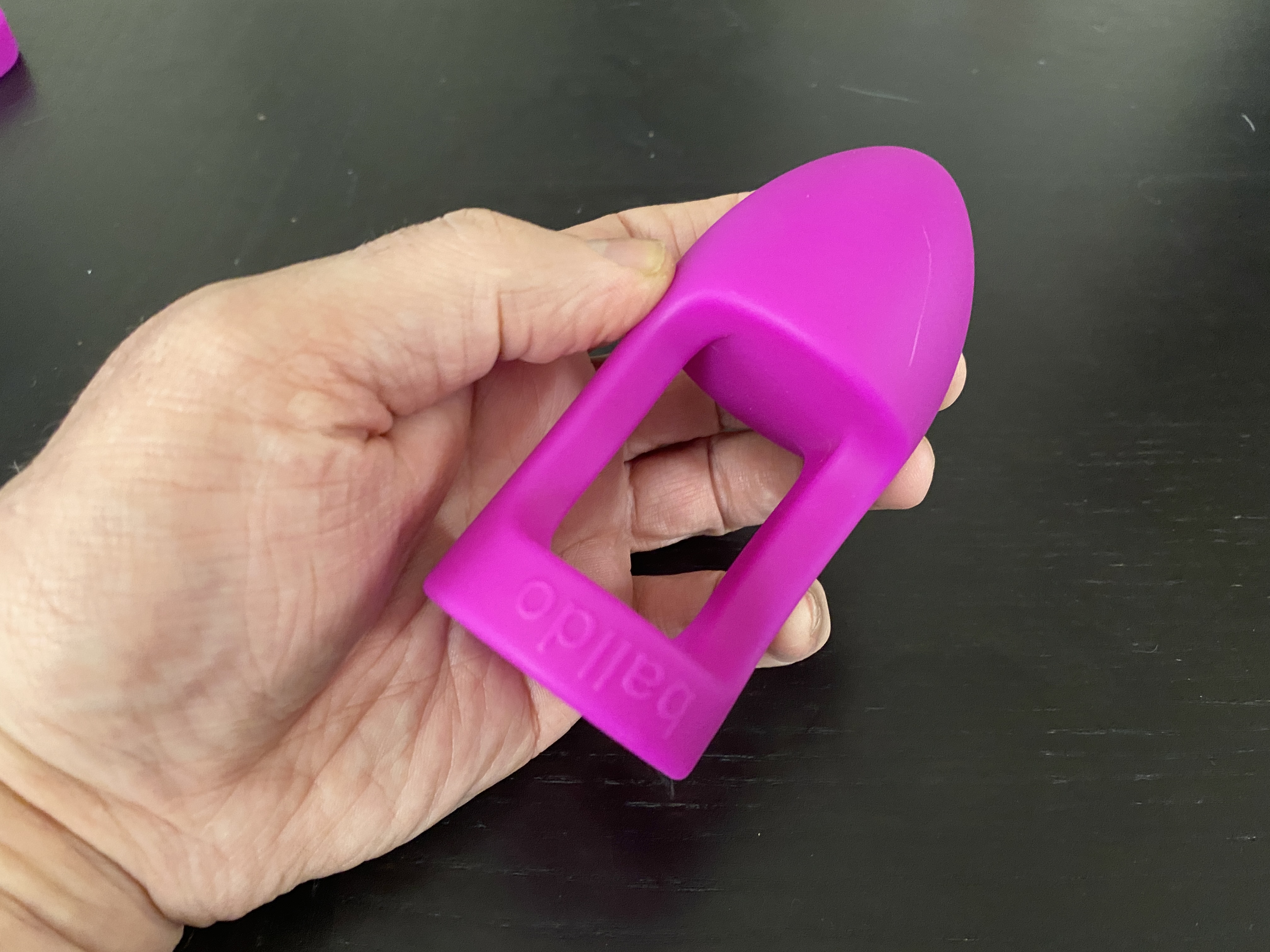 Thankfully, creators Davies and Plasencia had an inkling that more than a few of their customers would need assistance in putting their Balldo on. To help, they included a handy QR-code which opens a [NSFW] site chockful of useful information–including a short video of someone demonstrating how to get into it.

Oddly, the site seems to be angled towards early adopters rather than the general buying public. This is hardly a big deal and will no doubt be changed when more and more Balldos are on the stands, just, like I said, a bit odd.

Nevertheless, everything is well-written there, giving me nary a confused head scratch.

I was puzzled though, by how much emphasis this site as well as Baldo.com put on the importance of manscaping, i.e., shaving the scrotum beforehand to fully experience the Balldo's pleasures.

Possibly because getting your pubes tugged by the silicone rings would be uncomfortable or maybe the creators figure bare skin provides a better sensation? They don't plainly state why.

Personally, I found it tough to understand why narrow its already narrow demographic further by strongly suggesting users shave their balls.

That aside, getting into a Balldo is not difficult. The instructional video is of tremendous help as otherwise users may not readily understand where your parts go into its parts.

After manscaping and lathering up with water-based lube, (not silicone lube as this could damage the silicone of the toy) stretch the Balldo's base ring and then slide it up and over your testicles, so each one lies on either side of the toy's "cage."

If you want to reinforce and elongate your scrotum for partner penetration, position one or both of the spacer rings behind the Balldo.

If you have any kind of experience with toys such as cock rings or other testicular devices, you may be already familiar with how getting into them often results in a bit of bother or even occasional ouches until you manage to get them where they're supposed to be.

Fortunately, Balldo's body-safe silicone is comfortably balanced between firm enough for penetration, and not-too-much-so you can't comfortably fit yourself into it.

However, doing so will undoubtedly take a good deal of practice as balls are well-known for going everywhere except where their owners want them to. 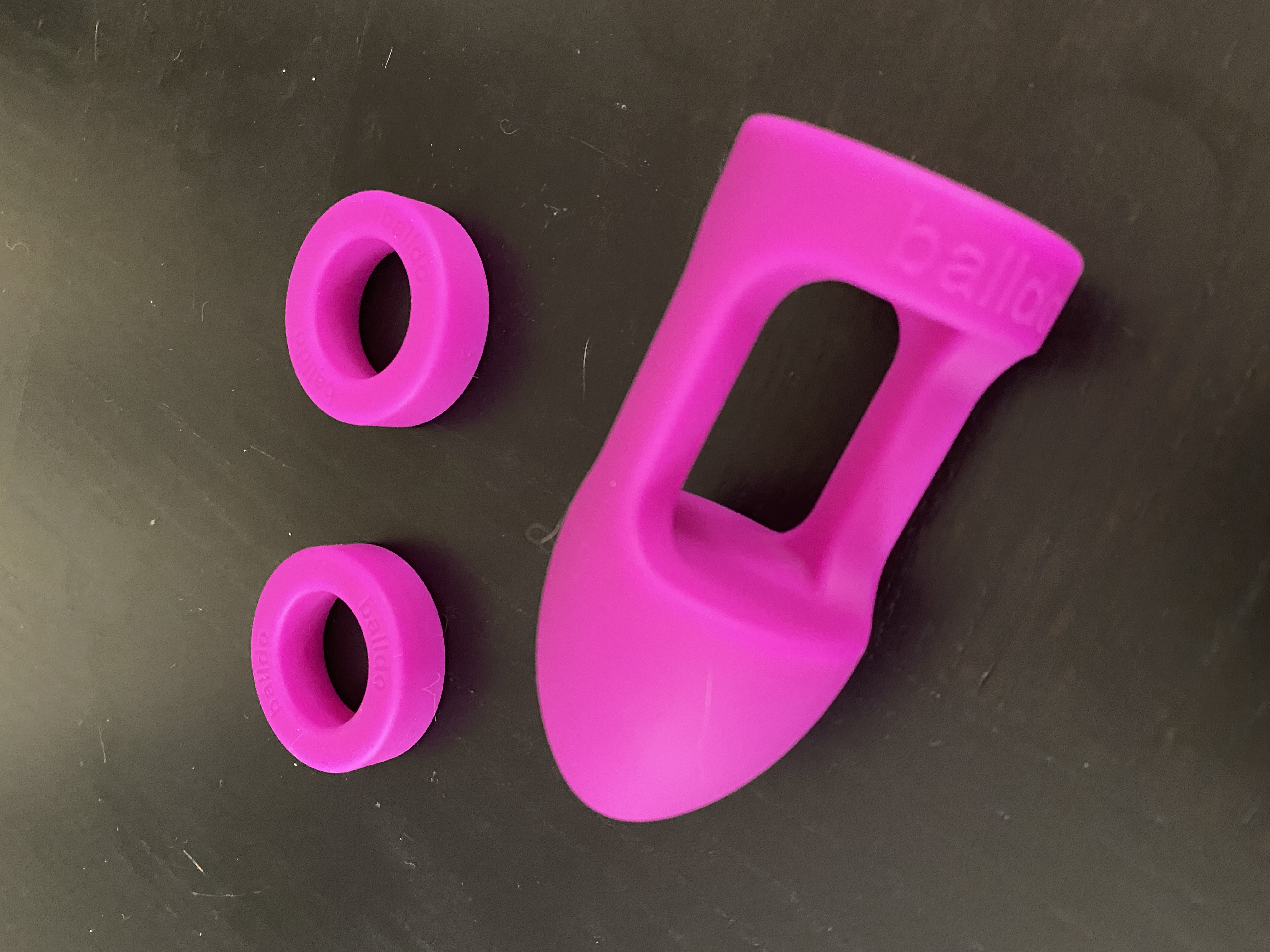 Regarding using Balldo for penetration play … let's just say it's definitely possible, though, with the considerable caveat, to accomplish it, it'll take partner maneuvering along with lots of care and attention on the wearer's part to avoid putting too much strain on their testicles.

Because of those and other concerns, you'll probably also have to forgo particularly vigorous intercourse or save it until you get more familiar with how the Balldo feels and behaves.

Similarly, if anal's a sexual favorite, my advice is to use a Balldo only after the receiving partner is somewhat stretched and opened up, as attempting to use it on a tightly puckered anus could be painful for everyone involved.

Beginning with getting into it and then onto using it, I’d call the time I spent with a Balldo to be notably different.

Keep in mind this is from someone with a bedside table drawer jam-packed with practically every kind of cock ring ever made, so I’m far from inexperienced in the aches and pains that sometimes come with trying to put them on.

Because I had to put the Balldo’s base ring around of my testicles, work it so they’re on either side of the section below it, slide one or more of its spacer rings around the entire toy and up and over them, those typical cock ring “aches and pains“ was doubled or maybe even tripled.

So unless you know and love cock rings a lot, you may want to wait until you familiarize yourself working yourself into them before picking up a Balldo.

After wrangling my dangly-bits into it, using the Balldo was equally different. Now, I don’t know about you. Still, when I think of penetrative sex, I usually picture classic positions like on penetrator-on-top (i.e., “missionary”), doggy-style, or rider-on-top.

To get a Balldo to where it goes in how and where it should--without painfully tugging on my scrotum--took a surprising amount of near-gymnastic maneuvering.

For instance, my partner and I found penetrator-on-top unsatisfying for them and awkward for me. It was a little better for doggy-style but barely that as it kept slipping out due to the Balldo’s width and shortness.

Penetrator-on-the-bottom was an improvement, though it was exhausting to keep constant track of where it was--and immediately compensate when it felt like it wasn’t going to hit the mark.

Laying side-by-side proved to be the winner. Even so, after working out all of this position’s various kinks, my partner still wasn’t a fan, saying it was girthier and stubbier than the other sextoys they’ve been used to. I remain on the fence as well.

Again, this is me, and while the Balldo wasn’t a bad experience, I kept fantasizing about the already-known delights of thinking beyond my penis and our favorite toys that we know and love.

A far better and safer approach would be to put penetration play aside in favor of exploring Balldo's potential as something akin to a cock ring or a kind of testicle-stretching device. 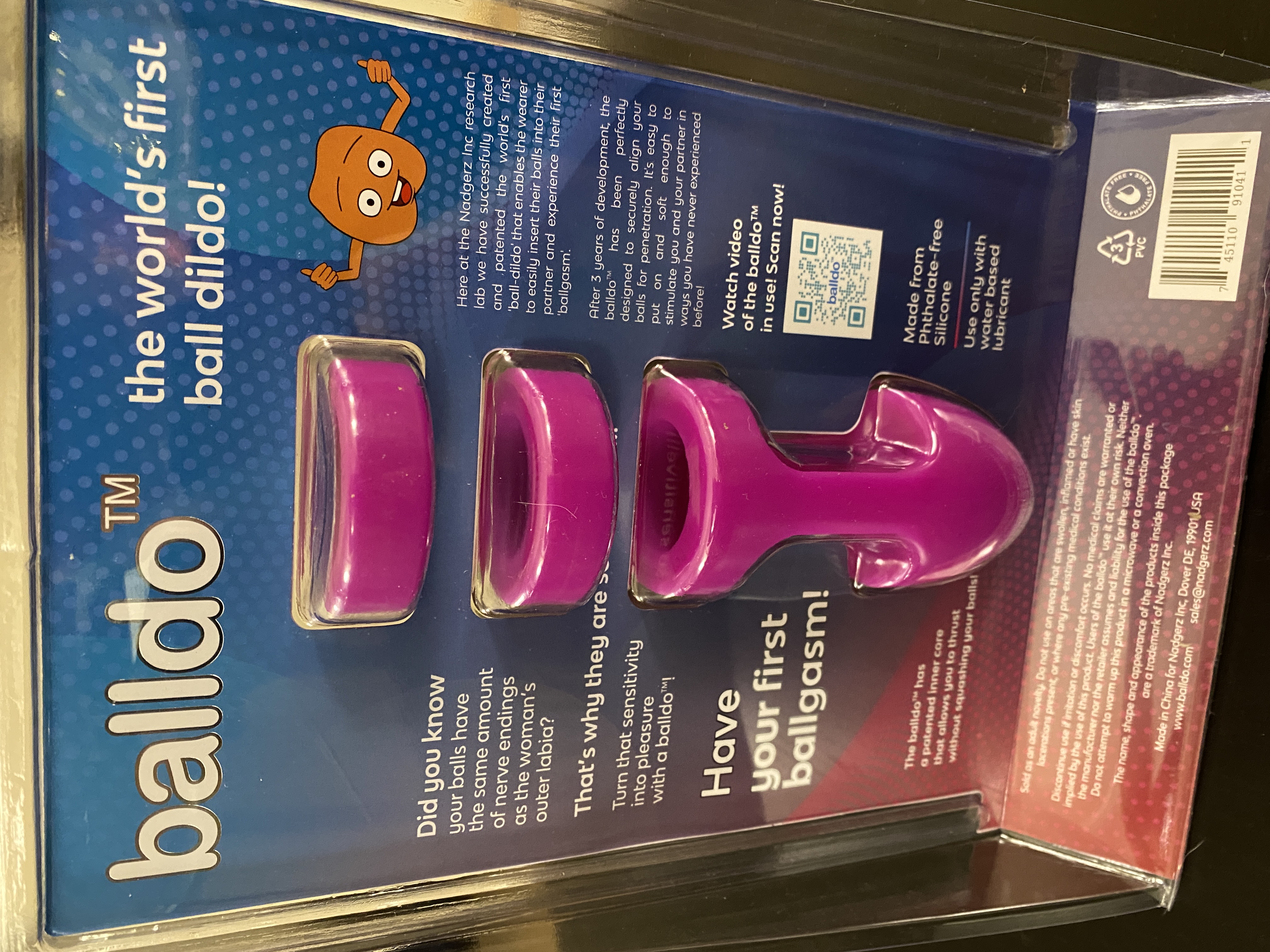 The insertable portion of the Balldo can be anywhere from 4 to 51/2 inches if you use one or both of its spacer rings, and its diameter is about 2 inches (6.28 cm) in circumference.

The Balldo's interior diameter is 1.18 inches though it is stretchy enough to accommodate most testicles.

The 10 Best Sex Positions for Back Pain
by MISTRESS KAY

Its spacers are approximately two inches across, with an interior measurement of about an inch.

The Balldo is made of body-safe silicone with a smidge of ABS Plastic and is available in either steel grey or fabulously purple.

Good old silicone being what it is, clean up with some warm (not boiling) water with a squirt of antibacterial soap will more than keep it spiffy until the next time it's called to duty.

As I've noticed, it tends to attract dust, and particularly cat fur; you'll probably want to store it in a ziplock bag. Not that you shouldn't give it a good scrub before and after you use it.

I really hate to say this, but the packaging is just spectacularly bad.

As my photos show, instead of opting for a stylishly handsome box or even just a study one, Balldo comes in a clear plastic clamshell that's obviously designed to hang on a store display hook. 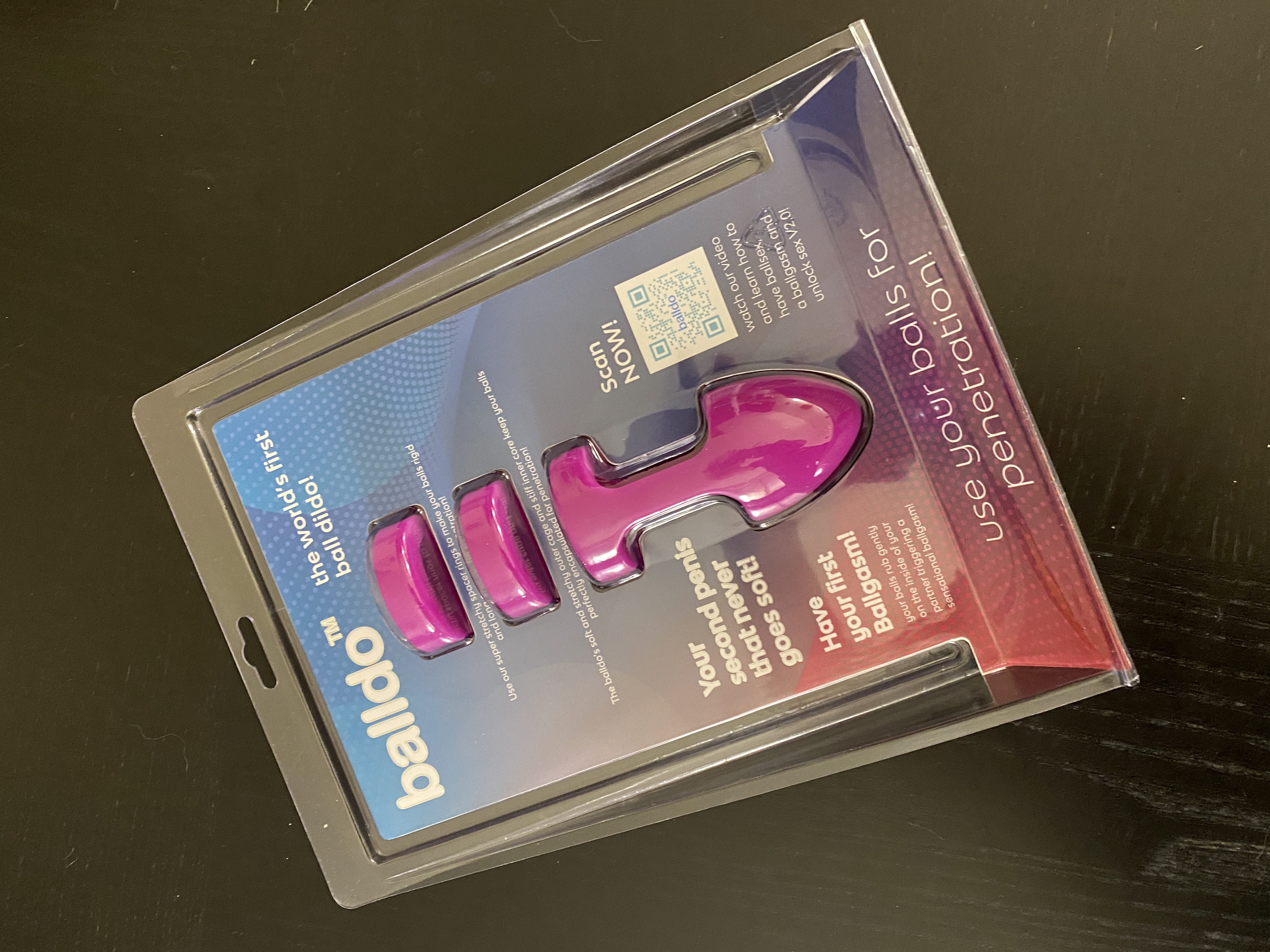 Along with its loudly proclaimed selling points, I also felt this choice of packaging materials gives it a distinctly "cheap" feel.

I probably wouldn't be so harsh if the Balldo's developers had included a few bare essentials like a bag to keep it in or if they'd printed a quick how-to guide on the reverse side of their packaging insert rather than requiring purchases to use their phone to access a site.

When writing sex toy reviews I tend to conclude them with an iffy thumbs up.

Not quibbling, per se, but more along the lines of "this is a fantastic toy if you like testicle stretching toys, if you're in pursuit of ways to enjoy penetrative play without needing to achieve or maintain an erection, and if you're comfortable shaving your balls."

This, as you may have guessed, is precisely how I recommend Balldo: that as it's extremely focused on a single type of sexual activity, it uses a noticeably specific style of sex toy to accomplish it.

But do I think this is a bad toy? Not at all! Actually, I want to praise Davies and Plasencia for developing the rarest of the rare: a totally unique product.

So if my ifs line up with your wants, then, by all means, buy yourself a Balldo–and I can enthusiastically say when you do, you'll have not one but two balls with it.

The problem with a toy that's unlike any other, is it can be tough to recommend toys that might come close to what using a Balldo is like.

Then there's our Perfect Fit Fat Boy Micro Ribbed Sheath, which adds both length as well as texture to penetrative play as the wearer receives their own enjoyable sensations.

The 10 Best Sex Positions for Back Pain
by MISTRESS KAY