by RACHEL KRAMER BUSSEL
Published: SEPTEMBER 6, 2013 | Updated: SEPTEMBER 6, 2013 09:48:21
Just because Christian and Anastastia’s relationship trajectory may share traits in common with actual domestic violence doesn’t prove anything.
"Fifty Shades of Grey" is in the news again, and it may have a few people up in arms. Not just because they don't like the actors who've been cast to play Anastasia Steele and Christian Grey in the film adaptation of the hit erotic novel, but thanks to the results of a study that emerged only a few weeks before the film was announced. It asks whether "Fifty Shades of Grey" is a "glaring glamorization of violence against women."

According to Amy Bonomi, chair of the Department of Human Development and Family Studies at Michigan State University and lead author of the new study "'Double Crap!’ Abuse and Harmed Identity in Fifty Shades of Grey," the answer is yes. Mainstream media have fallen for this idea hook, line and sinker. Witness U.S. News and World Report’s lede: "There's nothing 'grey’ about it. '50 Shades of Grey' ... portrays a relationship steeped in intimate partner violence, according to a study published Monday in the Journal of Women's Health." Alexandra Le Tellier in The Los Angeles Times writes approvingly of the study, adding, "In addition to promoting sexual abuse, it also trumps up the retro notion that women are more fulfilled when a man’s in charge."

Searching "'fifty shades abuse" on Google News got me 6,210 results.

With the rise of ebooks, "Fifty Shades'" deliberately non-threatening cover, and the sea change brought about by its popularity, this book has certainly reached countless readers who’ve likely never encountered the concepts of kink and safewords before. That could lead to some fundamental misunderstandings of what kink's about, but it still doesn’t mean E.L. James should be held to a higher standard than other fiction writers. We also have to give readers a little credit here. One of the core premises of erotic romance is that the hero and heroine are going to have their differences but will ultimately live happily ever after. That’s never in doubt. It’s how they attain this happy ending, the ups and downs and twists and turns they take, that makes the story powerful. That doesn't mean that as a reader you have to buy in to the protagonists' actions; if they come across as fake or unrealistic, then the novelist has failed.

The study says that Christian Grey, the sexy, brooding male lead in the book, exhibits stalker-like tendencies. I agree. That becomes pretty clear at the end of "Fifty Shades Freed," when James gives us two chapters from his perspective. When he’s not saying things like, "…immense power is acquired by assuring yourself, in your secret reveries, that you were born to control things" to Anastasia, he’s running a highly disturbing background check on her, which includes her bank balance, SAT score and place of employment (which he then pores over "for the hundredth time"). I found him a maddening and not particularly sexy - or all that picky - character.

However, when we take these criticisms out of the realm of fiction and into real life - as if there’s a direct one-to-one correlation - we're insulting readers by assuming they can’t form their own opinions and judgments. We may also be insulting actual victims of violence by implying that a consensual fictional relationship is really just an example of domestic abuse. If we dare to go that far, it’s just a quick hop from what the journal’s authors are claiming to the idea that all BDSM is bad, abusive and anti-feminist. Think that’s a crazy notion? It crops up fairly often. Vanessa Garcia at the Huffington Post suggests that we "switch race with gender" to discover why a woman submitting to a man is inherently problematic, then says, "Leaning in and submitting, whether in life or in fantasy are not 'hot' - they are belittling. These actions erase us as women, as people." Or check out blogger Jenny Rae Armstrong’s post "50 Shades of Broken: Why Do Women Fantasize About Abuse?"

"Women tend to become physically aroused when they sense any possibility of sexual aggression in their environment. This lowers their chance of injury if they are raped. It’s not dissimilar to the rush of adrenaline people get when riding rollercoasters or watching horror flicks. We are wired to survive. But it is crucial to understand that this does not mean that women want to be violated any more than a horror fan’s excitement indicates a subconscious desire to be hacked into pieces and plastered onto a wall. Even so, this phenomenon can cause a lot of confusion, shame and secrecy for women who don’t understand why they feel so aroused when they are exposed to threatening stimuli (such as rape scenes in "romance" novels), or who experienced orgasm or other physical responses during an unwanted sexual assault. It also explains why violent fantasies provide such a startlingly effective way for women, alone in the safety of their own home, to manufacture pleasant - if guilt-ridden - feelings of sexual arousal."

This idea is far more offensive to me than anything found in fiction. Armstrong’s argument is that women have adapted to eroticize their fear because "we are wired to survive." And that is way more than fifty shades of wrong. Armstrong, while rightly pointing out that no woman wants to be violated, fails miserably at explaining sexual fantasies. By implicating biology, she ignores the very basic fact that having a fantasy about something is very different from wanting it to happen in real life. It's the same basic problem with those who claim that Anastasia Steele and any woman sexually submitting to a man are, by definition, weak. (Get to know what BDSM's really about in Why BDSM Might Be the Sanest Sex Out There.)

The truth is, sometimes we are turned on by things that unnerve, confuse and even scare us. To me, good erotica doesn’t shy away from that tension, but acknowledges that we’re not all constantly living in the sexual equivalent of the REM song "Shiny Happy People." Good erotica zeroes in on what makes these taboo topics sexy for a particular character. Here’s the opening sentence of my story "A Slap in the Face:"

"Jade strolled into the bar, walked straight up to Amber, who was leaning against it wearing a slinky leopard-print slip, ripped fishnet stockings, a see-through black top along with a sheer black bra, and dangerously tall black heels, her red hair gleaming even in the low lights, and slapped her across the face."

If that was all you read, it might look like violence, and if the story ended there, the reader would be left wondering what exactly was going on. You wouldn’t know that this whole fantasy came about at Amber’s request, or that the paragraph continues:

"The sound was louder than Jade had expected, the sting in her palm stronger, both of which she liked. Amber didn’t smile, not with her mouth, anyway, but Jade knew exactly how much she’d liked Jade’s slap. She could read it in the way Amber shivered, the way her eyes skittered from the ground and, for a second, up to Jade’s, from the way her body radiated a heady combination of fear, awe and desire."

Plus, there is no single correct interpretation of a work of literature. Just because Christian and Anastastia’s relationship trajectory may share traits in common with actual domestic violence doesn’t prove anything - or help victims. I understand the impulse behind these warnings, but we do far more harm than good when we confuse fact with fiction, and consent with abuse. (If you hated "Fifty Shades," check out 5 Books That'll Make You Forget About "Fifty Shades.")
Advertisement
Advertisement
Advertisement
Have Better Sex!

Perspectives
Is Your Relationship Unhealthy or Abusive? Knowing When to Get Help and Get Out
by DR. LAURA MCGUIRE | Sexuality Educator, Trauma Specialist, Inclusion Consultant

Perspectives
Is Your Relationship Unhealthy or Abusive? Knowing When to Get Help and Get Out
by DR. LAURA MCGUIRE | Sexuality Educator, Trauma Specialist, Inclusion Consultant 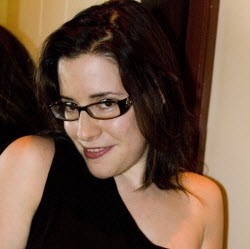