Truth: There's No Such Thing as a Slut

by BOSTON SINGLE GIRL
Published: SEPTEMBER 23, 2015
Slut doesn't mean what you think it means ... isn't it time we embrace sex instead of shaming people over it?

In this day and age, it amazes me that women are still shamed for being sexual beings. Um, hello?! We’re human! We have desires and fantasies and needs, damn it, just like men! So how is it that we're living in a society where women have fought for the right to vote, for equality in the workplace, and for the freedom of choice when it comes to our bodies, but we're still living in the Victorian era when it comes to female sexuality?

Slut, whore, tramp, easy; these are just some of the words used to describe a woman who enjoys sex. Yet it’s perfectly acceptable for a man to behave in the same way and he’s deemed a lady’s man, a player, a pimp. Double standards irritate the hell out of me, especially when it comes to the sexual exploits of men and women. Rather than shame each other for openly enjoying something we all know is a natural human act, we should be encouraging each other to be sex positive!

As a society, we send mixed messages: using sex to sell your product or business is acceptable, but a female who openly enjoys sex, now that’s just sinful! We live in a highly sexualized society and yet, as women, we are told that it’s wrong to be sexual beings; we’re told we shouldn’t think about - let alone talk about - sex.

The Truth: There’s No Such Thing as a Slut!

I’m a word nerd, so I had to look up the etymology of the word ‘slut.’ I discovered that the word originated in the 1400s and one definition of the word was, “A dirty, slovenly, or untidy woman.” However, the modern sense of the word originated in 1966 when the word ‘slut’ became defined as a “woman who enjoys sex in a degree considered shamefully excessive.” 1966? Wait a second! Weren’t the '60s the time of the American sexual revolution? Who decides how much sex is "excessive" and worse, "shamefully excessive?"

Let’s face it - there's no such thing as a slut! This new movement of turning sluts into a special interest group who need to be protected from slut-shaming is just utterly ridiculous. The word slut is used to tear down women and to shame them for doing what is perfectly natural and human - having sex. It doesn’t matter if it was one guy (or girl) she had sex with or 25; people will still call her a slut if they don’t agree with her behavior, don’t like her, or simply because they are jealous.

Who Are They to Judge?

I am the last person in the world you want to tell to put their freak flag away when it comes to sex! I am constantly writing about and talking about my sexual exploits, and if someone doesn’t like it they can go to hell! You should do the same to anyone who judges you for getting your freak on and loving every second of it.

If you love a good pounding in the morning (or noon, or night) then so be it! If you need to start or cap off your day with an orgasm or two, then by all means you should get what you need! If you come home after a shitty day and just want your partner to throw you against the wall, pull your hair, and fuck you until the neighbors are screaming in delight, then by all means you should be able to do that without judgment.

Who are they to judge, anyway? In my experience, when people get their undies in a bunch over my sexual satisfaction, it’s usually because their own sex life sucks. Sorry baby, that’s not my fault (but maybe you should stop being so damn nosy about my sex life and fix your own.)

Sex is supposed to be fun, not taboo or something to be ashamed of doing. Sex is a natural part of human existence. It is not something to shush away and only talk about in hushed tones behind closed doors (unless that turns you on, of course). You shouldn’t feel like you’re doing something wrong or bad because you enjoy sex. That’s what being sex positive is all about - embracing your sexuality.

Personally, I think everyone should be more open about sex. We should all be talking about it openly and honestly, especially with our partners. Hell, if you can’t talk about sex with the person you intend to be naked with, then maybe you should rethink getting naked. I’m all for the one-night stands and casual sex, but even people who plan to fuck and forget should, at the very least, get the STI and birth control talk out of the way first. Plus, why not let the person know what you like and how to bring you to climax?

I love rough, raunchy sex. I love having my hair pulled and my ass smacked. I love to dominate men in the bedroom and I also love being dominated. I love men and women. I love group sex and threesomes. I love watching as well as being watched. If all of this makes me a slut, well, then I’m happy to be one. At least my sex life is satisfying!

More people should close their mouths, open their minds (and their legs), and see sex for what it is: a positive intimate experience between two or more consenting adults who just want to get their rocks off.

There’s nothing wrong with that in my book, but who am I to judge? 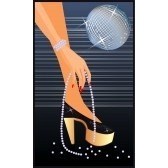 Boston Single Girl
I’m just a single girl in Boston; working, living, dating and writing about it all! The stories are real, but the names have been changed to protect the not-so-innocent.