by JUSTYN HINTZE
Published: MAY 28, 2015 | Updated: JULY 31, 2018 09:20:41
There’s a lot of debate about whether female ejaculation exists, whether it’s urine, and if it’s something every person with a vulva can accomplish (whether or not they identify with the female sex). It’s like the mystery fluid, and conclusive evidence about female ejaculation hasn’t been verified medically. People who agree that female ejaculation exists still don’t necessarily agree on its makeup, its origin, or its purpose.

When Was Female Ejaculation First Discovered?

Where Does the Fluid Come From?

Female ejaculation is released from up to thirty or more tiny glands in the urethral sponge or female prostate. This is the spongy erectile tissue surrounding the urethra. The urethral sponge is on the inner wall of the vagina, and is often referred to as the G Spot. I’d argue that this portion of the vagina is not just a spot. It’s a whole complex system that is part of the larger clitoral and vaginal network. Did you know that the clitoris is actually made of eighteen different parts?

The terms are often used interchangeably, but that’s not always technically accurate. Female ejaculation is the release of fluid from the vagina during sexual activity, and can range from droplets or spritzes to cups or puddles of fluid.

Why does the amount of fluid vary so much? It might have to do with how turned on you are, or how comfortable you feel. "There may be a number of reasons for the huge differential in the amounts of female ejaculate. Some women may simply have more, or bigger, glands than others, or their glands may normally produce more fluid, the way some people sweat much more than others," explains Dr. Chalker.

Sexual Health
'Personal Responsibility' Sex Ed - and Why It's a Terrible Idea
by RYN PFEUFFER
Advertisement
Have Better Sex! 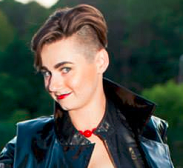 Justyn Hintze, a queerfeministlesbiandyke, is an advocate for breaking binaries, and just breaking stereotypes. She has an MEd in Human Sexuality Education from Widener University, and is a sexologist, educator, pleasure revolutionary, and public speaker.

Justyn is passionate about eliminating discrimination, and creating safe spaces to foster open, raw conversations. She was the Sexual Freedom Summit Co-Chair in 2013 and 2014, and is a member ofWoodhull Sexual Freedom Alliance's Advisory Council. Justyn is also the Project Manager and Social Media Campaigner at Rad Campaign, a full-agency Web development company campaigning for progressive nonprofits. Justyn is a guest writer for Frogloop, RH Reality Check, and Teaching Sex Ed, to name a few, and has facilitated panels and workshops at conferences and in classrooms nationwide.
Full Bio
In The Kinkly Shop
Visit The Kinkly Shop