"Strip," I ordered. I saw their hands flash to their buttons as I turned and pulled the covers back on the bed to set up the other sex toy I have from Liberator, the Throe blanket. We probably use it 75% of the times that we play. I turn up the heat. Then, I pull out their ankle cuffs instead of the neoprene cuffs that came with the cushioned spreader bar. When their clothes are off, I shove them back onto the bed to buckle the cuffs onto their ankles.

The thing about most sex toys is that you can actually DIY with a variety of other methods, but the store-bought and company-manufactured versions are often much easier to use and so much more satisfying. For example, you can use a cane or any long stick as a spreader bar. My first spreader bar was a plastic cane I'd bought as a teenager to use with a Dracula Halloween costume. I'd wrap it around someone's ankles with rope, which, while rather effective, was neither subtle, pretty, or particularly skillful. So, I didn't do it very often. I'd be more inclined to use the footboard of my bed to bind someone's legs apart.

My genderqueer boy uses they/them or he/him pronouns. I love the in-between space they occupy. It mirrors my own, but our genders express very differently. Now unclothed, my boy's body is still very boyish with their wide shoulders and narrow hips. They stay completely shaved at my request. They do a lot of things at my request. Most of the time, things like spreader bars just get in the way because if I tell them to keep their legs open, they just will.

I've never had much use for sex furniture on a personal level until more recently. As I get a bit older, and as my knees and hips aren't as flexible as they used to be, the extra boost and support is really helpful.

I have another spreader bar, a purple one. It's long and has eyelets on each end. It's hard to get someone secured to it, they have too much room to move around instead of being immobilized. Maybe I need a bar with the actual cuffs already attached. Maybe I need one that is like that over-the-shoulder spreader bar and collar that Lee wears in The Secretary. I'll add that to my sex toy wishlist.

The Talea Spreader Bar from Liberator is different, though, because it's kind of a combination of sex furniture and spreader bar. You get more support than you would just from using a pillow. It's also more cozy than harsh.

They are facedown, sucking on a dick shaped gag and squirming. Their hands are free and they hold them under their body, curled up, comforting themself. Their legs are held open by the cushiony spreader and I'm between their legs, kneeling with my feet under the spreader and my butt on top of it. The rounded shape actually keeps my ankles supported rather than squishing them. My weight holds it down and that, in turn, holds their legs down.

They still squirm. I picked some of the meanest toys we have: a rug beater paddle, a homemade cane made from a blackberry bramble, and a hard flat leather paddle. I want their thighs and ass that particular color of purple that I know fades into a rainbow before it's gone. I'm going through each toy one by one. That sweet boy is rolling their hips and twisting, but my weight on the spreader between their legs is keeping them pinned. It's satisfying. I feel that deep cackling satisfaction in my stomach and press my ass and ankles together to keep them trapped. I shift my weight forward to bring my hips against theirs and lay my weight out over their back. I growl into their ears about how they're mine and can't go anywhere so they may as well relax. These are the games we play.

My boy and I both value leather over most other materials when it comes to sex and kink play. If not leather, then some other sort of natural materials—cotton, wood. I like things that used to be alive. I think they still hold in them the ability to transmit energy. They are a better conduit of what I'm trying to communicate with my body during sex. I feel less connected to plastic, nylon, and vinyl. Those choices are, however, better for clean-up.

I prefer metal snap hooks over plastic connectors mostly because I worry that they won't last. However, they have proven sturdy and reliable so far. It's easy enough to use my own leather cuffs and connectors to the spreader bar itself.

It's not that they can't close their legs exactly, but it certainly keeps them more open. They squirm to try to get away from my instruments, but they only have a few inches of wiggle room with this spreader bar attached.

When the beating is finally over, we are both worked up. They lift their legs and use the cushioned bar to pull me closer, to rock us together, and to pull against. We haven't used the Talea in nearly enough positions. We're just going to have to try it again. 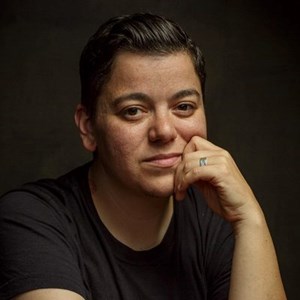 Sinclair Sexsmith is a feminist dominant, writer, and teacher. They run the online course Submissive Playground which starts again in January 2015, and they write about power, rough sex, and personal adventures on Sugarbutch.