In Small-Town Georgia, Getting a Sex Toy Requires a Doctor's Prescription

Well, you do if you live in Sandy Springs, Georgia, where it’s illegal to buy or sell sex toys unless you’re doing so "for a bona fide medical, scientific, educational, legislative, judicial, or law enforcement purpose." In other words, you need a prespription.

Basically, that means you have to prove that you’re going to use the toy for one of those reasons. Not so much fun if you want to keep your playtime to yourself, not to mention a giant invasion of privacy.

Bans on sex toy sales are hardly new, although usually they’re statewide, not citywide. But one thing that all these bans have in common is that they’re rooted in this country’s long history of governing "morality" around sex. There have been numerous moral panics around people’s sexuality, around what clothing one can and can’t wear in public, and any number of regulatory laws aimed at controlling people’s relationships with their own or others’ bodies.

You might be surprised by some of the laws still on the books in much of the United States.

Many of these laws aren’t common knowledge until someone gets caught breaking them, or a savvy citizen decides to challenge them.

People have generally gotten around bans on sex toy sales and purchases by marketing sex toys as novelties, but there’s still been that ever-present fear of inadvertently breaking the laws. Marketing toys as novelties also takes away customers’ choices around making safe, high-quality, affordable purchases.

What really jumps out about this ban in Sandy Springs, though, is that both the complainants and defendants in this lawsuit have some ideas about sex toys that are pretty far off the mark. Let's have a look at a few of them.

A quick search of other news sources covering the sex toy ban in Sandy Springs shows an emphasis on the disabled, married woman who filed the lawsuit because, in part, sex toys helped restore her sexual relationship with her husband. Many versions leave out mention of the male artist with whom she filed. "Man sues for legal right to jerk off with toys and make art with them" isn’t the most scintillating headline, I guess. As usual, reporters are moved by an inspirational story - how sex toys fixed a marriage and helped with disability. In usual media fashion, fun and creativity (never mind sexiness) just don’t make for good copy.

Yes, toys do solve problems. Or, as I like to put it, they provide more sexual options. For someone whose body doesn’t work the way it used to, or doesn’t work the way they’d like it to, that’s pretty serious stuff. That’s exactly why we need to keep the focus on playfulness, why so many toy shops put great effort into presenting an inviting image.

But, toys are also fun. They’re toys after all. Children’s toys are educational and they help with things like hand-eye coordination, but they wouldn’t do any of that if they weren’t fun to play with in the first place. Why shouldn’t we look at grown-up toys the same way? (Learn more in How Sex Toys Can Help You Play Nice With a Partner.)

Toys Are Dirty (Unless Used Within a Marriage)

When they’re not being elevated to boyfriend status, toys are often called "marital aids," reinforcing the idea that they’re just fixers. Clearly, prevailing wisdom is telling us two contradictory things. So which one is it? Are sex toys exclusively the domain of married people, or are they best used to comfort the hearts and loins of singles?

Contrary to popular belief, sex toys never replace a human partner, whether a person has one of those or not. Vibrators can’t cuddle, share a meal, or engage in stimulating (mentally stimulating, that is) conversation, and people can’t generally rumble at tremendous speeds, or form themselves into elaborate shapes, or stay hard for just the right amount of time on any given day. Some toys are made specifically for couples. And while they might help bring couples together, those little gadgets still don’t cuddle or wash dishes.

Oh, and sex toys are never dirty - unless you forget to wash them!

Sex Toys Are Dangerous to Us Unless Prescribed by a Doctor

One thing a lot of people don’t know is that most healthcare professionals don’t get a lot of training around sex and sexuality. This can mean that providers aren’t comfortable talking about sex, don’t have the knowledge to explore whether a health problem is related to sex (such as the link between yeast infections and toxic toy materials), or give mistaken or out-of-date information about sex or sexual health.

That’s not to say that if you’re having a sexual problem you shouldn’t consult with your healthcare provider, just that you’ll want to make sure you’re talking to someone who has training in, or at least comfort with, discussing sexual issues. There are lots of great resources out there to help people explore their sexuality and deepen their understanding of their bodies, but the truth is that a doctor usually isn't the one with the skills to solve the whole problem - or any of it.

Sex Toys Are Bad for the Community

I wanted to know how a sex toy shop actually fits into its community, so I asked Jacq Jones, owner of Sugar in Baltimore, to share some thoughts.

"I've owned a sex-positive, education-focused sex toy store in Baltimore since 2007. In those years, we have worked hard to act as a community resource. We regularly receive referrals from doctors and therapists for individuals and couples who are encountering sexual difficulties as a result of cancer treatments, aging, erectile dysfunction, etc. Every week, we have couples come in who are experiencing dissatisfaction in their marriage or relationships. Often we receive a thank you phone call the next day. Our education and products regularly strengthen the community by providing support for healthy relationships. We also model consent in the store, and actively work to expand consent culture and prevent sexual assault. In addition, as out supporters of the GLBTQ community, parents and employers of GLBTQ individuals have turned to us for resources and support, Jones said.

"Occasionally, people will encounter folks they weren't expecting in the store. We ask them to respect each other's confidentiality. And, they do."

If You Need (or Want) a Sex Toy, There Must Be Something Wrong With You

Again, we have an assumption that directly conflicts with another assumption: That something is wrong with someone (particularly with women, particularly women partnered with men) if they need toys to help them reach orgasm.

No wonder so many people feel guilty using toys! On the one hand, they’re supposed to fix everything. On the other, we’re not supposed to need them!

The answer to this one is really very simple: Everyone gets to do what they want with their own sex life. Yes, some people need toys to help with orgasm. Some people want sex toys so that can orgasm bigger, better and more quickly. Or, what they’re looking for has nothing to do with orgasm. Whether you need the toy or want it ultimately doesn’t make any difference. Sex is your private thing and you get to do whatever works for you. People who set policies or come up with marketing campaigns probably don’t want it to be as simple as that, but I assure you that it is. (Just a quick aside here: Maybe you’re wondering what we ever did before sex toys. It's a hard question to answer, because it looks like we’ve had toys for millennia.)

These days, there are few things where we aren't expected to use some sort of appliance or equipment. Sex isn't really much different from anything else in life. Unfortnately, it’s often only when something dramatically goes wrong that we start paying attention to our bodies. The same goes for sex. 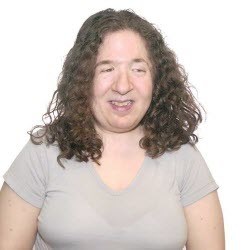 Robin Mandell
Robin Mandell is a sexualities and relationships educator based in the Washington, D.C., area. She holds a bachelor’s degree in women’s studies from Queen’s University in Canada and a professional writing certificate from Washington State University. Over the years, she has amassed extensive experience working with people at vulnerable times of their lives, both as a crisis hotline worker and a sexuality and relationships education advocate with Scarleteen. Robin blogs about disabilities, sexualities and the connections between them at Ready, Sexy, Able and has published articles on various sexuality and sexual health topics at Scarleteen and Fearless press.
Full Bio
In The Kinkly Shop
Visit The Kinkly Shop