The 3 Kinds of Men You'll Find In Strip Clubs

by JENNIFER WARD
Published: JANUARY 7, 2015
Men visit strip clubs for many different reasons but there are only three types of guys: the good, the bad and the creepy.
I worked in a strip club for four years, so I know what women tend to think of them. Ladies, you assume that men go to strip clubs purely to get laid, am I right? I'm not saying this doesn't happen; sometimes it does, sometimes it doesn't. But the reality is that all different types of men go to these places, from doctors to homeless men and everything in between. I've even met a couple of pastors. Most of the time, an entertainer really functions as a cheap therapist with less clothing. Sometimes, strip club patrons just need someone to talk to - someone who won't judge them.

All men are different, and they go to strip clubs for different reasons. What I'm trying to say is that you can't just blanket a whole gender and say "men do this because". So, here's a little insight into the male psyche. When it comes to strip clubs, I've seen three kinds of guys: there are good guys, bad guys and guys who are just plain creepy. Here's my take on why all these types of men visit a gentleman's club. (Interested in checking out a strip club as a couple? Read A Lady's Guide to the Gentleman's Club.)

There are some single men who would rather pay to meet women simply because there are no strings attached. As far as I'm concerned that's their business; it doesn't make them bad guys. My favorite good guy is "the talker". He just wants to talk about his life and his problems. Most of the time he doesn't even want any advice; he just needs someone to listen to him unload. Granted, a guy like this is often in a situation where he should be telling these things to his wife. For some reason, he doesn't. My theory is that these men either don't want to make their wives worry for no reason, or their wives try to fix the problem for them. By nature, men are problem solvers. They don't want a solution to their problems, they just want someone to listen while they talk through it.

But strippers don't just give listen. They also dance, and there are men who visit strip clubs because they genuinely enjoy a good show (my husband is one of them). If there is a dancer who really performs and has a few good pole tricks under her belt, these guys will be there until the place closes for the night.

Next up is guys gone wild. When I worked as a dancer, I worked in a tourist area and there are always these huge groups of guys that come once a year. Some of them fall into the good category. They are on vacation and just want to relax, have a few drinks and talk to a pretty girl. The rest, well, they fall into the "bad" category. I'll get to them later.

Another group of good guys are what I like to call "white knights." And while they are really sweet guys, they are pretty pitiful. They tend to get attached to a dancer and think that they're going to save her from "that life". (Dancers call a guy like this "Captain Save a Ho".) Unfortunately, that means they usually get taken advantage of. You'll see them a few months later with an empty wallet - and a broken heart.

Last but not least, some guys come to strip clubs because they have fetishes, but these guys can really be good guys too ... depending on the fetish. I've had men pay me to let them rub my feet. Score! I also knew a girl who got paid very well to let her customer brush her hair. A lot of these guys think they are weird for having fetishes, but for the most part they aren't that gruesome. Let's be honest, what woman would complain about having her feet massaged?

Most of the guys who fall into this category are master manipulators. Pimps are a good example of this. They come into a club with a lot of money and find a pretty girl with some self esteem issues and start throwing money at her. Then they start this line about how they know about a club in such and such state that is a real money maker and they can take her there. If she bites and goes with them, she has to pay them back somehow. There are also drug dealers who double as pimps. They are double bad news. They give girls samples of drugs, get them hooked, then pimp them out for their habit.

Oh, and remember the big group of once-a-year guys? I mentioned before that some of them are good. Well, the rest of them are bad. Just bad. They take their vacation as a free pass to hook up with as many strange women as possible while they're away from their wives. All I can think is that if they're that unhappy with their wives, they probably shouldn't be married.

Finally, there are some guys who are just bums. They go into a club with the intention of finding a girlfriend because they think that all dancers make lots of money and that equals a free ride for them. (Puh-leeze!)

And here's one more that might shock you: I've met a couple of religious leaders in strip clubs too. They come in under the guise that they are trying to help poor dancer girls find God. Come on. We all know why you're really in the club. Using God as an excuse to look at naked women? That's why these guys fall under the "bad" category.

Oh, the creepy guys. They walk through door and you feel it: A desire to run screaming out of the building. When it came to guys like this, I also knew, just as sure as looking at them, that they had some woman chained up in their basement. Well, maybe not ... but they were definitely bad news.

The perfect example is a client I'll call "Mr. Bates." I had seen him around the clubs a lot and I already knew that there was something just not right about this guy. He had a foot fetish, which in and of itself is fine, but he had no money and was very touchy feely - even forceful. Whenever I saw him coming through the door, I sat down and found another customer to talk to - whether that customer wanted to talk to me or not.

One night I was already with a customer that I was really getting along with and we were actually talking about creepy customers when Mr. Bates walked through the door. He had a plastic bag in his hand and wandered around for a bit before finding a new girl to talk to. My customer and I watched for a while as they whispered to each other. Suddenly, the dancer got this look of total horror on her face.

Mr. Bates eventually left and because I absolutely had to know what happened, I went over to the dancer he was speaking to and asked her what was in the bag.

OK, I thought. That isn't too weird. Guys bring stuff in all the time for girls to wear. I told her this. She just looked at me wide eyed, like a deer caught in the headlights.

"No," she said, "they were full butted, cotton crotch, tummy control pantyhose. I asked him why in the world would he want me to wear those and he said that they belonged to his grandmother."


Why Do Men Go to Strip Clubs?

All types of men go to strip clubs. Some are good, some are bad and some are just creepy. But here's the thing: If you want to know why your man goes to strip clubs, just ask him. You should be able to ask your partner about things like that. That's assuming your guy falls into the "good" category. If not, run. Especially if he wants you to wear his grandmother's underpants. (For an interesting read from the stripper's perspective, check out "Bare: The Naked Truth About Stripping" on Amazon.com.) 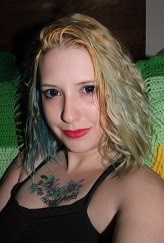 Jennifer Ward
I'm 25, married and have two kids. All I need is a white picket fence to keep out the crazies.  I'm an undergrad student majoring in Psychology.

It also just so happens that I've supported myself in the past by working as an exotic dancer (or "pole jockey", whichever you prefer). As a result, I feel like I have a very unique view of sex and relationships based on my experiences. I hope that I can open some minds to new and exciting things!