The Results of Our Sex Ed Survey Are In!

by KINKLY STAFF
Published: JULY 18, 2016
We asked you about your sex education. Here's what we learned.

June was Adult Sex Ed Month, an event we here at Kinkly are especially passionate about. Throughout the year, we get a lot of questions and comments from readers about sex. There's just so much you all want to know - and we've learned a whole lot teaching it to you! But we were curious about our readers' backgrounds, their early sex education and where you go to learn about sex now. Here are the results of the two surveys we ran during Adult Sex Ed Month.

Your Biggest Resource for Sex Ed? The Internet

Twenty seven percent of survey respondents told us that that the Internet was their biggest resource for information about sex. Online resources beat out parents (5.49%), friends (14.9%) and sex ed classes in school (10.2%). The second most common resource people accessed was books (19.22%) followed by pornography (14.9%). Several people said they also learned about sex from partners and personal experience.

When it comes to sex education in school, most of our readers (56%) got some sex education in public school. That sounds promising, but the details about the kind of sex ed readers received is a bit more troubling. For example, 61% of respondents said they were never taught about sex being pleasurable. Most people also failed to learn anything about self pleasure. As for condom use, nearly half of respondents said they never learned how to apply a condom as part of sex ed. Research suggests this is a huge knowledge gap with major repercussions; most condom failures occur as a result of improper use. That said, some respondents reported getting to practice applying condoms to bananas, vegetables, anatomical models and, in one instance, the school nurse's head ...

Sexual Health
Survey: Where do you get your sex info?
by KINKLY STAFF

We also asked our readers where they're getting their sex ed these days. The overwhelming answer: Google. 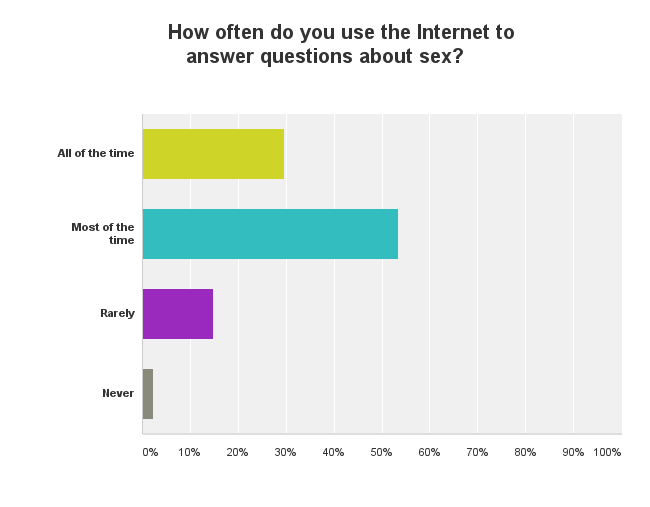 However, when it comes to which resources to trust the most, our readers know where it's at: 34% said they put the most stock in sex educators - they trust them more with sexual issues than their doctors! What You Want to Learn More About: Kink!

As a site devoted to sex education, we were also curious to find out what our readers wanted to learn more about. The overwhelming answer: spicing things up - and kink! (We will definitely get to work on that!) If you haven't taken our surveys, you can still do so here. We will continue to compile and update results over the next few months.

Sexual Health
Survey: Where do you get your sex info?
by KINKLY STAFF